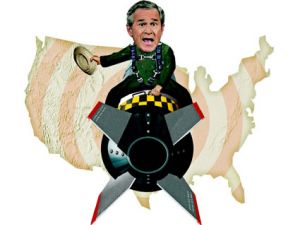 One of the most outrageous assertions concerning the run-up to the Iraq war is that the US intelligence community made a series of honest mistakes and that in fact, most foreign intelligence agencies agreed that Iraq probably possessed weapons of mass destruction.

This is a pack of lies (incidentally, still perpetrated by talking heads on Sunday television.)

Left-wing magazine Mother Jones published an updated timeline of the events leading up to the war. The recurring theme: ALL the WMD evidence used to create support for the war was cherry-picked, uncorroborated, or outright fabricated, and this fact was KNOWN to the Bush White House. Indeed, it was known to many outside the White House, including laypeople like myself, who chose not to be blinded by the White House’s pro-war propaganda blitz.

Here is an excerpt from the Mother Jones timeline, focusing solely on the intelligence estimates and ignoring other data points (e.g., justifying torture, underestimating the cost of war, failing to plan for the occupation.)

So that’s it. I don’t think there is much doubt here. The case for the war on Iraq was based on trumped up evidence, purposeful misuse of intelligence data, the silencing of detractors, lies, intentional fabrications, dubious confessions obtained using torture, and purposefully ignoring expert contrary opinions both within the US intelligence community and from abroad.

Later rationalizations shifted the picture slightly, trying to pretend that the war was based on the fact that the possibility that Iraq had WMDs could not be excluded with absolute certainty, and that Hussein himself was interested in creating ambiguity. This may be technically true but it misses the point: Iraq was not attacked on the premise that they may have a few leftover chemical shells filled with mustard gas or that they may, at some unspecified future date, restart WMD programs. Iraq was attacked on the premise that Hussein’s active, reconstituted nuclear, chemical, and biological weapons programs represent a clear and imminent threat to the security of the United States.

One Response to “Intelligence or a pack of lies? Who reports, who decides?”