The other day, a conservative friend of mine sent me a link. It was to a paper purportedly demonstrating that conservatives were more ideologically diverse than their liberal counterparts.

I found this result surprising, rather striking to be honest, and contrary to my own experience.

The study, as it appears, has not been published yet but it is available in an online manuscript archive. It certainly appears thorough. So how could it come to its striking conclusions?

I think I figured out the answer when I looked at the appendices, which provide details on how the research was conducted. Here is a set of questions that were used in two of the four studies discussed in the paper:

When I look at this list, it is clear to me that questions 1, 2, 4, 8 and 11 are standard “liberal” pushbutton items, whereas the rest are “conservative” in nature.

But look more closely. Items 1, 2, 4, 8 and 11 are, insofar as liberal views are concerned, very mild and mainstream. Closing the income gap? Taxing income? (Not even a mention of progressive taxation.) Social programs? I know of no liberal who would disagree with these broad concepts. In fact, I can think of many conservatives who would readily subscribe at least to some of these ideas.

Now look at the conservative questionnaire items. Flag burning? A great many conservatives in the US believe firmly that this right is strongly protected by the First Amendment. Gay marriage? Sure, it’s an issue for some, but for many conservatives, it’s either something that they are neutral about (or may even support it) or often, it’s an issue that comes up more as a matter of states’ rights vs. the federal government, without a priori opposing the idea.

The results, therefore, are not surprising after all. Since most liberals agree on mainstream liberal ideas, the liberal side comes across as ideologically monolithic; and since many conservatives take issue with narrowly defined, often religiously motivated line items, they come across as more diverse, more heterogeneous.

Ironically, then, the liberal bias of the researchers resulted in a paper that, contrary to their expectations, appeared to show that the conservative side is more ideologically tolerant than their liberal counterparts. In reality, though, I think the paper merely demonstrates the garbage-in-garbage-out principle that is so well known in computer science: when your research is flawed, your results will be just as flawed.

Allow me to preface this post with the following: I despise Donald J. Trump, the infantile, narcissistic, racist, misogynist “leader of the free world” who is quite possibly a traitor and may never have become president without help from his Russian buddy Putin. Also, when it comes to matters that I consider important, I am a small-l liberal; I support, for instance, LGBTQ rights, the right to have an abortion, or the legalization of cannabis, to name a few examples. I celebrate the courage of #MeToo victims. I reject racism and misogyny in all forms, open or covert.

Yet I am appalled by some of the things that happened lately in academic circles, sadly justifying the use of the pejorative term “SJW” (social justice warrior) that is so popular on the political right. A few specific cases:

I call these incidents “irritants” when it comes to free speech.

On the one hand, publications dedicated to social science and education publish even the most outrageously bogus research so long as it kowtows to the prevailing sociopolitical agenda.

On the other hand, obscure research is thrust into the spotlight by intolerant “SJW”-s who seek to administratively suppress ideas that they find offensive. While this goal is technically accomplished (Strumia’s presentation and Hill’s paper were both successfully “unpublished”), in reality they achieve the exact opposite: they expose these authors to a much greater audience than they otherwise would have enjoyed. The message, meantime, to those they purportedly protect (e.g., women, minorities) is one of condescension: these groups apparently lack the ability to think critically and must be protected from harmful thoughts by their benevolent superiors.

Beyond all that, these actions also have negative consequences on academic life overall. In addition to suppressing controversial research, they may also lead to self-censorship. Indeed, I am left to wonder: Would I have the courage to write this blog entry if I myself had an academic career to worry about?

Last but not least, all this is oil on the fire. Those on the right, fans of Jordan Peterson and others, who are already convinced that the left is dominated by intolerant “SJW”-s, see their worst fears confirmed by these irritants, and thus their hostility increases towards the scientific establishment (including climate science, political economics, genuine social science research on refugees and migration, health, sexual education, etc.) with devastating consequences for all of us living on this planet.

If we truly believe in our small-l liberal values, it includes defending free speech even when it is vile speech. It also includes respecting others, including women and minorities, not misguidedly protecting them from hurtful ideas that they are supposedly too weak and fragile to handle. And it includes defending the freedom of scientific inquiry even if it is misused by self-absorbed losers. After all, if we can publish the nonsensical writings of Gutiérrez, surely the world won’t come to an end if Hill’s paper is published or if Strumia’s presentation remains available on the CERN workshop archive.

I admit that until today, I have not even heard of gab.com. Or if I have, it escaped my attention.

Today, I visited the site, and I was taken aback by the amount of vile hate, white supremacist and anti-Semitic garbage, lunatic right-wing conspiracy theories, falsified history, and yes, even calls for violence.

Unfortunately, gab.com shares the fate of vixra.org, the uncensored/unmoderated alternative to the Internet physics manuscript archive arxiv.org: instead of a credible, balanced alternative, it became a fringe magnet.

That said, the imminent shutdown of gab.com is precisely the wrong response, for way too many reasons to count. First, free speech is worthless if we don’t tolerate speech that offends us. Second, it plays right into the hands of the lunatic right-wing fringe, confirming their worst conspiracy theories and affirming their views of leftist intolerance. Third, in the era of the Internet, it is really not possible to shut a site or a service down (witness sci-hub, by way of example.) At best, it’s a whack-a-mole game.

If we don’t stand up to support gab.com’s right to exist today, we give up a very important right. Those who think censorship is the answer will not stop here. Martin Niemöller’s poem (First they came…) applies. They will come for others, in the name of all that’s good and decent, until the only voices that remain are those bland, compliant ones that the powers-that-be consider acceptable.

I just came across this picture of a newly built bicycle path in Hungary, complete with signs marking its beginning and end, as well as a stop sign instructing bicyclists coming off the path to yield to oncoming traffic: 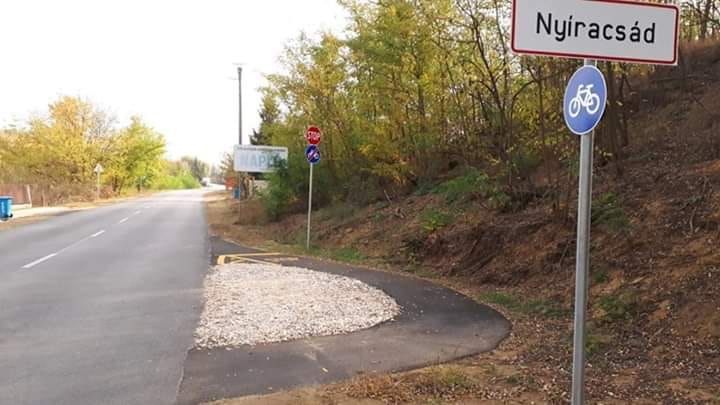 I don’t think I can add any meaningful comments, other than perhaps that this bicycle path may yet find its way into the Guinness book of world records, albeit not necessarily for the right reasons.

Just got back from The Perimeter Institute, where I spent three very short days.

I had good discussions with John Moffat. I again met Barak Shoshany, whom I first encountered on Quora. I attended two very interesting and informative seminar lectures by Emil Mottola on quantum anomalies and the conformal anomaly.

I also gave a brief talk about our research with Slava Turyshev on the Solar Gravitational Lens. I was asked to give an informal talk with no slides. It was a good challenge. I believe I was successful. My talk seemed well received. I was honored to have Neil Turok in the audience, who showed keen interest and asked several insightful questions.

I just watched a news conference held by the University of Waterloo, on account of Donna Strickland being awarded the Nobel prize in physics.

This is terrific news for Canada, for the U. of Waterloo, and last but most certainly not least, for women in physics.