Here is an old friend from the neighborhood that we have known for 12 years already, but whom we haven’t seen since October: 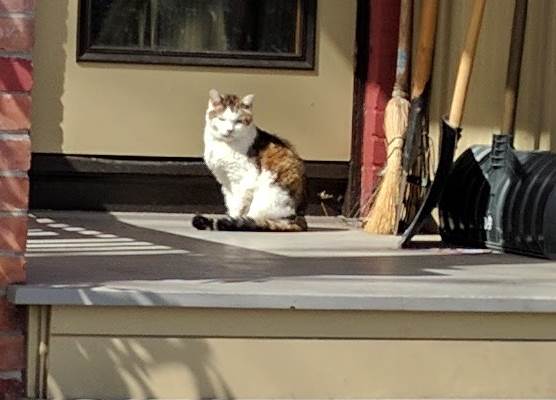 But today, he was outside, enjoying the warmth of the early spring sun.

Hello, MJ. It is so good to see you again.

Without further ado, this video sums up my thoughts for the day:

Retired counterintelligence officers rarely give interviews. It is even more unusual for them to do so without anonymity. 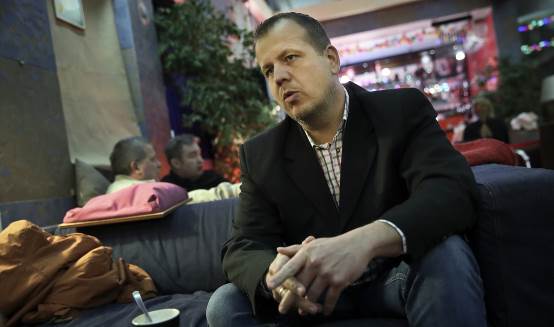 Yet this is exactly what Ferenc Katrein, a former Hungarian counterintelligence officer did, when he was interviewed by the independent Hungarian news portal index.hu.

The full interview is available in English.

Katrein tells us of a secret service offensive that is waged by Russia against the European Union. He speaks of a corrupt Hungarian leadership that offered an opportunity for many Russian citizens to enter and even settle in the country in return for a modest investment with little or no effective background checks. He speaks of the role of Russia in far right movements in Europe, and their campaigns of disinformation.

All in all, it is a rare glimpse into how a counterintelligence service works on the eastern fringes of the European Union, and the extraordinary challenges that Europe faces in light of an aggressive (and in many ways, unrestrained) Russian foreign policy agenda. 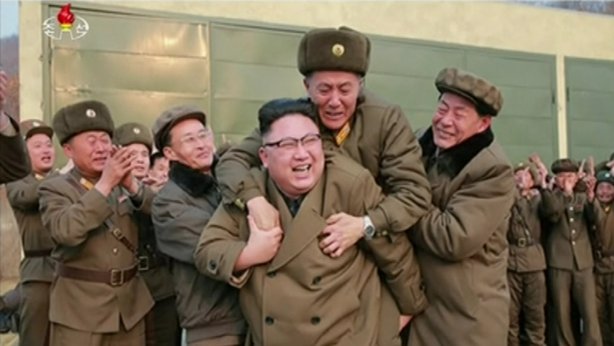 The joy on these faces seems genuine. To think that an officer so forgot himself in that moment of celebration, he actually jumped onto the shoulders of the country’s all-powerful leader!

What they were celebrating was the successful test firing of a new rocket engine.

And thus, self-fulfilling prophecies are born. North Korea may think that it is defending itself from US aggression. But they do not seem to realize that it is precisely their stance and their weapons program that make them a subject of US threats and sanctions.

And they especially don’t seem to realize that with a genuinely unhinged leadership in the White House, further provocation may achieve the exact opposite of what they want: Instead of being able to preserve the regime, they might see it come to an hasty end as Washington decides to intervene after all, leading to a tremendous loss of life no matter the outcome.

Recently, I answered a question on Quora on the possibility that we live in a computer simulation.

Apparently, this is a hot topic. The other day, there was an essay on it by Sabine Hossenfelder.

I agree with Sabine’s main conclusion, as well as her point that “the programmer did it” is no explanation at all: it is just a modern version of mythology.

I also share her frustration, for instance, when she reacts to the nonsense from Stephen Wolfram about a “whole civilization” “down at the Planck scale”.

In any case, I have another reason why I believe we cannot possibly live in a computer simulation.

But I think this is precisely why the threshold will never be reached. One of these days, someone will prove a beautiful theorem that no large-scale quantum computer will ever be able to operate above the threshold, hence scalable quantum computing is just not possible.

Now what does this have to do with us living in a simulation? Countless experiments show that we live in a fundamentally quantum world. Contrary to popular belief (and many misguided popularizations) it does not mean a discretization at the quantum level. What it does mean is that even otherwise discrete quantities (e.g., the two spin states of an electron) turn into continuum variables (the phase of the wavefunction).

Of course a conventional analog computer is very inaccurate, so nobody seriously proposed that one could ever be used to factor 1000-digit numbers.

But if quantum computers do not exist… well, then they cannot simulate the world, can they?

Two further points about this argument. First, it is purely mathematical: I am offering a mathematical line of reasoning that no quantum universe can be a simulated universe. It is not a limitation of technology, but a (presumed) mathematical truth.

Second, the counterargument has often been proposed that perhaps the simulation is set up so that we do not get to see the discrepancies caused by inefficient simulation. I.e., the programmer cheats and erases the glitches from our simulated minds. But I don’t see how that could work either. For this to work, the algorithms employed by the simulation must anticipate not only all the possible ways in which we could ascertain the true nature of the world, but also assess all consequences of altering our state of mind. I think it quickly becomes evident that this really cannot be done without, well, simulating the world correctly, which is what we were trying to avoid… so no, I do not think it is possible.

Of course if tomorrow, someone announces that they cracked the threshold theorem and full-scale, scalable quantum computing is now reality, my argument goes down the drain. But frankly, I do not expect that to happen.

And then there is this one (if it exists at all):

Somebody posted this on Google+. They wanted to know what its properties are. And now, so do I. There are a few tungsten compounds listed in online databases, but this is not one of them. Does it even exist? I don’t know. For some reason, I expect it to have properties not unlike those of tungsten carbide, but I could be completely off the mark.

There is a piece of North American technology that was responsible, among other things, for the “most successful failure” in the history of America’s space program, the successful return of Apollo 13 after a major explosion on board.

A few weeks ago, when chatting with a family member from Hungary who happens to be a proud, freshly minted engineer, I learned, much to my astonishment, that this technology is still not commonly used (if available at all) in Europe.

And today, much to my delight, I found out why: Perhaps it’s because it is still manufactured domestically, in my case right here in Canada.

Here is what I am talking about: 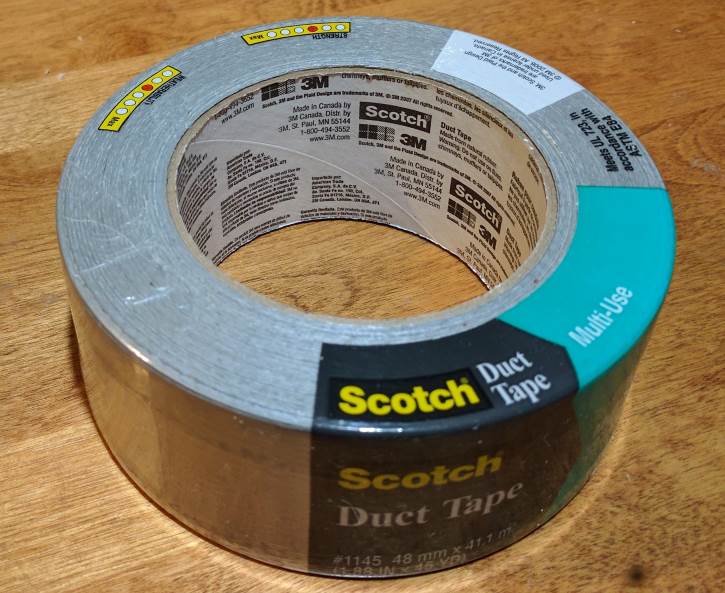 Yes, the mundane duct tape. Proudly made in Canada, as the label on the inside informs me.

It is my understanding that duct tape was included in the emergency repair kit of every American spacecraft launched to date. On Apollo 13, it was with the help of duct tape that they were able to adopt CO2 filters, extending the time they were able to spend in the lunar vehicle, which was used as a lifeboat during the long trip around the Moon.

I am beginning to wonder if this technology should be placed on strategic export control lists. Who knows what duct tape can do in the wrong hands! Imagine Kim Jong Un with a roll of duct tape… or Vladimir Putin. Or Iran’s Revolutionary Guard. The world would be a lot less safe if every despot had free access to copious amounts of duct tape.

Oh well, enough ranting. I need to do something useful, like some vacuuming. Recently, the wand of my vacuum broke. Rather than ordering a costly replacement at a price higher than an old vacuum cleaner is worth, I fixed it and so far, the wand is working like new. As to what I fixed it with, you guessed it… it was duct tape. Works wonders.

I just caught this on CNN. A statistic that shows that most Americans believe ISIS is the gravest threat to their country: 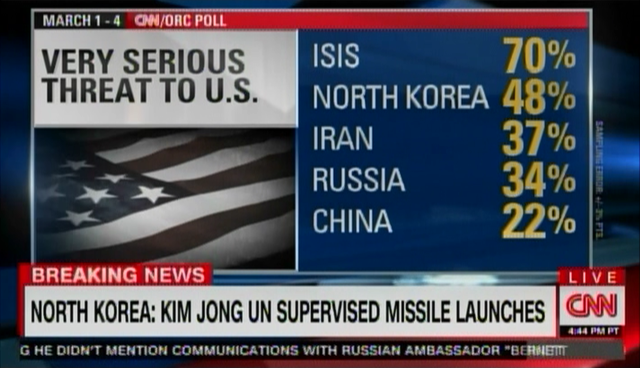 And this shows why populism wins votes. Because in actuality… first of all, there are only two countries on this list that represent an existential threat to the United States, Russia and China, and China only marginally so.

North Korea is a threat mainly because it is unpredictable, but even if they develop a nuclear tipped ICBM, the country remains a distant third on the list of real threats.

As to Iran and ISIS… they are no threat to the United States at all. ISIS has no capability other than inspiring some “lone wolf” attackers. Iran has no desire to engage in direct conflict with the US, nor do they have any serious capability to harm the United States; they may be “state sponsors of terrorism”, but their actual threat contribution is below the noise floor.

So I think in terms of the real threat they represent, the order should be more like Russia, China, North Korea, ISIS, Iran. That is, almost completely the other way around.

But when the commander-in-chief and his cabinet are blabbering about how they must protect America by shutting the doors on refugees, too many listen.