Every once in a while, strange coincidences occur that make me wonder if we live in a simulation after all.

Take today. Just moments ago, I ran across a tweet by Trump’s former director of communications (for 10 days), Anthony Scaramucci: I found the reference to Max Headroom amusing; it’s been a while since I last saw any mention of this once iconic television series (which I happened to like very much.)

But then, no more than two minutes later, I ran across a Quora question that I was asked to answer, only to find an existing answer (good one, incidentally) that begins with a quote: 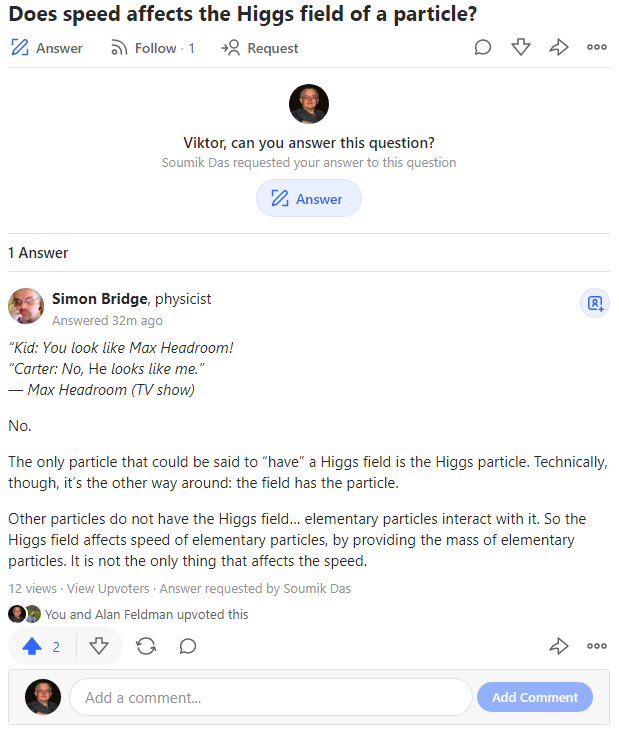 What exactly are the odds that I run across two completely unrelated Max Headroom references within minutes of each other? 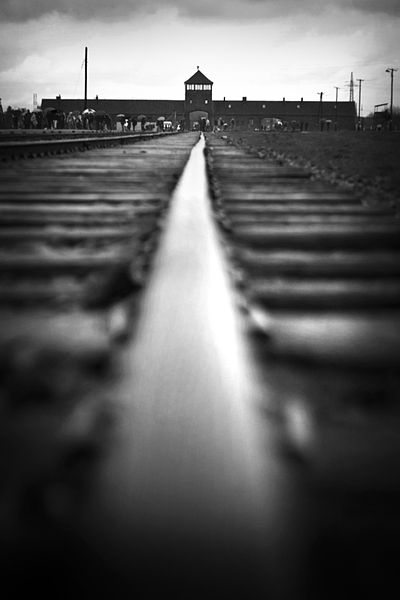 Today, I had to widen a column in an Excel spreadsheet in which I record some numbers. 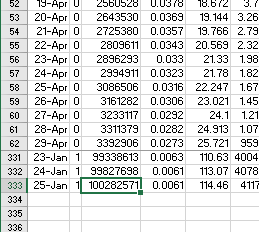 It is a spreadsheet that I use to keep track of confirmed COVID-19 cases.

The actual number of cases is likely much higher, since systematic testing is not available everywhere, and even where it is, people with milder symptoms or no symptoms at all may not get tested.

This number is also accompanied by the number of known COVID-19 fatalities: well over 2 million and counting, with the end nowhere in sight. COVID-19 may yet put the Spanish Flu to shame, despite a century of progress in medical science, despite the scientific miracle of rapidly developed, engineered I should say, mRNA vaccines.

Let me begin with a simple statement: I am not a parler.com fan. 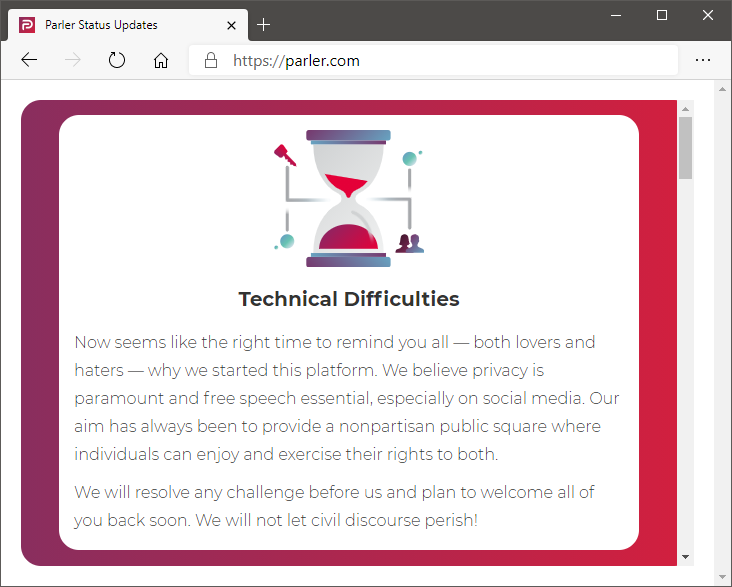 Of course, there has to be a line drawn somewhere. It is one thing to publish a racist rant about the inferiority of some human beings. It is another thing to call for genocide. Somewhere between these two is (or should be) a clear bright line: criminal “hate speech” is speech that calls for violence, speech that instructs readers to commit a crime.

Arguably, parler.com crossed this line multiple times when it failed to remove posts calling for violence against lawfully elected or appointed public officials, when it called for a violent uprising against the lawful government of the United States.

So what is my problem, then? Simple: I am alarmed by the idea that we are outsourcing the (legitimate, necessary) policing of the boundaries between free speech and criminal speech to corporations. Not just social media corporations like Facebook and Twitter, but also to corporations that provide fundamental Internet infrastructure, such as Amazon’s AWS.

As private corporations, these companies are of course well within their rights to deny their platforms to anyone, for whatever reason. But is this the world in which we wish to live? Where private corporations manage our fundamental communication infrastructure and decide who can or cannot communicate with the public?

This does not bode well for the future.

When the commercial Internet emerged, Internet Service Providers asked to be viewed by the law much like telephone companies: common carriers, that is, who are responsible for providing an infrastructure, but are not responsible for the content. (The telephone company does not become an accomplice by providing the service through which criminals arrange a crime.) But social media blurs this line, since these companies become the curators of user-supplied content, which they prioritize, filter, and use for advertising. And companies like AWS must be mindful of the content supplied through their infrastructure, since there are repercussions: letting an AWS VM spit out spam, for instance, can cause other service providers to block a range of AWS IP numbers affecting a large number of well-behaved AWS users.

But now, we have service providers that police political content. Even attaching labels like “the factual accuracy of this item is disputed” is questionable: Who disputes it? How can I trust the objectivity of the fact checkers who attach such labels? But things get much worse when Facebook or Twitter altogether ban someone like Trump from their respective platforms, or when AWS kicks out parler.com.

There has to be a better way.

And I think there is a better way. Now is the time, I think, for this industry to create a nonprofit council that establishes and manages standards, adjusted if necessary to take into account applicable law in different jurisdictions. The institution should be arms-length, with secure funding, so that its decisions would not be swayed by undue influences or funding concerns. The process should be entirely transparent. And companies, especially social media and cloud computing infrastructure companies, should abide by the standards set by this council.

The alternative is just unacceptable. I don’t care how well-intentioned Facebook or Twitter or Amazon are, I do not wish our freedom of expression in our digital future to be opaquely managed by for-profit corporations.

Today we had one. 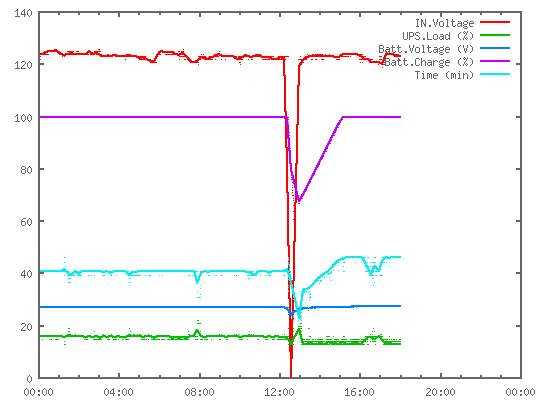 Needless to say, Murphy’s law was also fully at work. I decided to shut everything down when it appeared that power was not going to come back soon (a fairly large area of Ottawa was affected), and of course, power came back two minutes later. But one of my UPSs didn’t come back online and needed a hard reset (unplug, remove the battery pack) while my desktop computer didn’t like it that suddenly a whole bunch of external hard drives, normally powered down, came to life as it was coming back from hibernation, and so it promptly crashed.

Oh, did I say that I don’t like power outages? I really don’t. Fortunately, as I recall, this was our first unscheduled power outage since the great Northeast blackout of 2003. So they do not happen often.

Still hate them, though.

I never thought I would feel this relieved listening to something so mundane: a perfectly normal, boring press conference from the White House, discussing policy details, executive actions, technicalities, in a professional and civil manner. 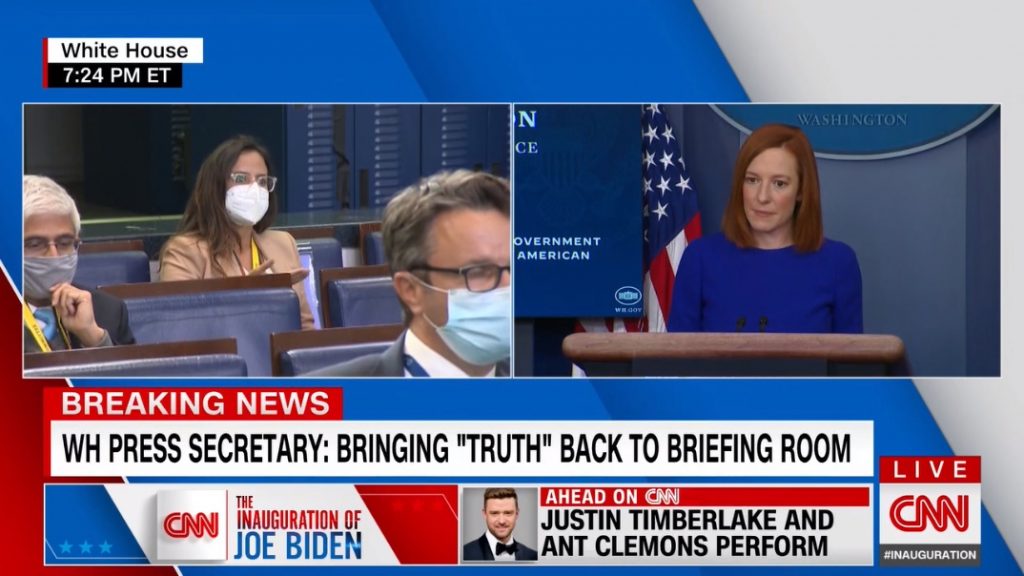 The adults are back in charge. 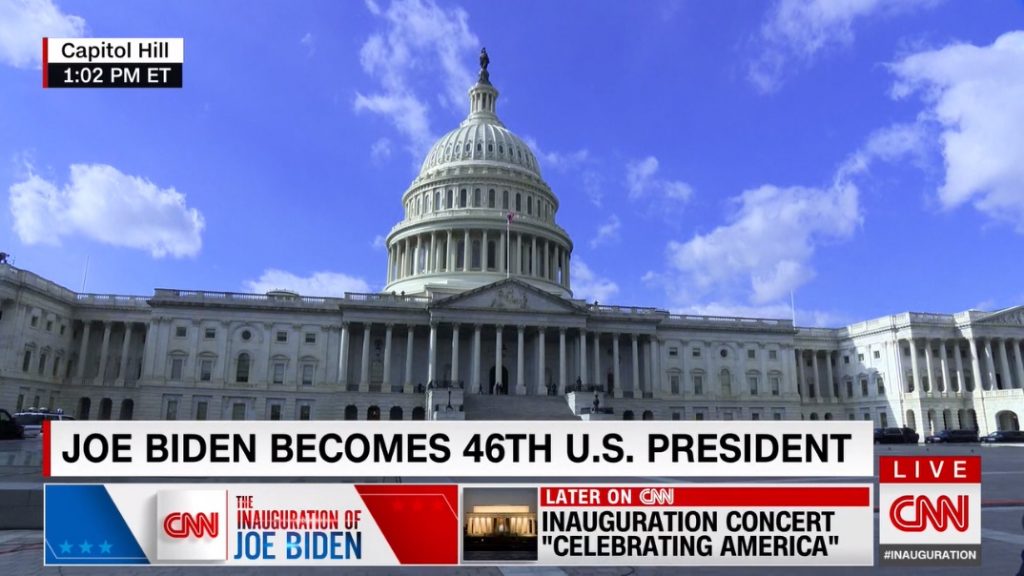 Coups d’état don’t succeed without support from the armed forces. That’s a historic given.

So when strangely clad “warriors” wearing fur hats and tattoos storm the Capitol Building in Washington DC, the sights are unsettling, people may die, but the stability of the United States government is not in any way in question.

But what happens when the troops who are supposed to prevent it from happening again themselves come under suspicion? 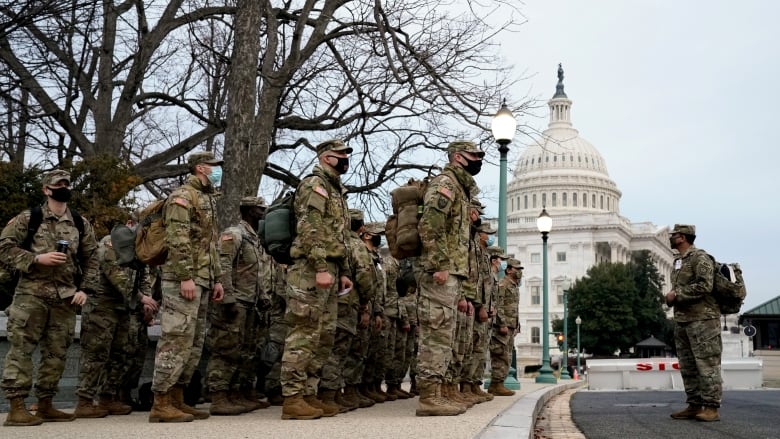 Just read the headline from the following Associated Press news release from minutes ago:

Just how the bleep do you vet over 20,000 troops hastily sent to Washington in less than 72 hours?

And what will that vetting do to their morale?

I am beginning to feel truly frightened.

I am reading an interdisciplinary paper, published in Frontiers in Conservation Science, about the likeliness of a much more ghastly future than usually predicted: A future characterized by deteriorating environmental conditions, mass extinctions, a collapsing ecosystem threatening human existence.

The concerns are real. The warnings should be heeded before it’s too late. But… But, having read the article, I cannot escape the feeling that the authors themselves practice some of what they preach against.

They mention the “weaponization of ‘environmentalism’ as a political ideology”, rightfully expressing concern that as a result, environmental groups are often viewed as “terrorists” in many parts of the world. But then, later on, among the suggested remedies they list “the empowerment of women”.

Now I may be very fond of the idea of empowering women (I am) but I have to ask*: what does this have to do with climate and the ecosystem? Are women inherently better at being environmentally friendly? Do they have special abilities to understand climate science better than men? Or is it, heaven forbid, an actual example of someone, well-intentioned I am sure, sneaking in a desirable political goal by “weaponizing environmentalism” for ideological purposes?

*I could ask similar questions about “strict regulation of markets and property acquisition, reigning in corporate lobbying” (which appeared in the same sentence). While I may sympathize with reducing corporate influence by constraining campaign financing (I consider near unconstrained financing one of the core reasons behind the current democracy crisis in the United States), what on Earth does it have to do with climate or the ecosystem? I would also like to remind the authors that regimes that had strict regulations of markets and property acquisition, such as the socialist regime in which I grew up, have a terrible environmental track record: and yes, they tended to treat environmental groups as terrorists, insurrectionists or worse, precisely because such groups acted independently and refused to be controlled by those governments.

Tens of thousands of military personnel in Washington. Troops quartered in the Capitol building, reportedly for the first time since the US Civil War a century and a half ago. Establishment of a “Green Zone” like the one the US set up in Baghdad in 2003. An inauguration ceremony that is closed to the public, and not because of the raging pandemic. Threats of violence in every one of the 50 state capitals. News of rioters planning to assassinate public officials, including quite possibly the Vice President of the United States. News of lawmakers who feared that their lives might be threatened by… their fellow lawmakers, who are also conspiracy theory activists. News of other lawmakers who were afraid to vote to impeach the President because they felt that their lives were at risk if they did so. And law enforcement responding with not one but both hands tied behind their backs: not only are many of the insurrectionists themselves part of law enforcement, but they are cheered on by none other than the sitting President of the United States of America. 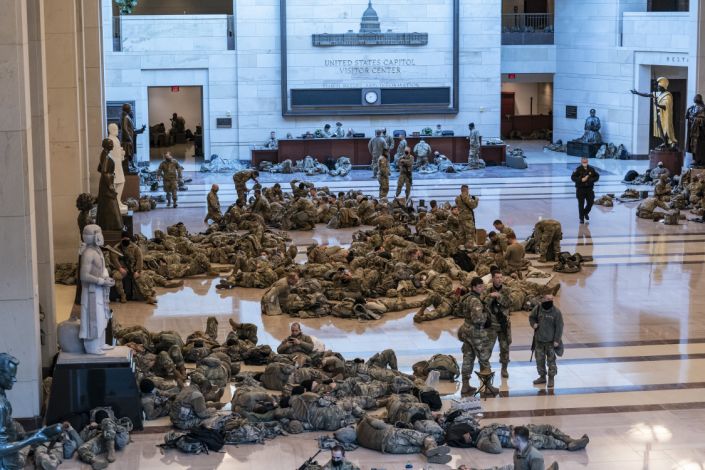 Can someone please tell me that this is just a bad dream, perhaps I got lost in one of Harry Turtledove’s alternate history novels, or perhaps a Netflix science-fiction series set in an alternate present, and that in reality, all is well?

Because if that’s not the case, I have to ask… Can someone please tell me what the bleep is happening?

In light of Trump’s Twitter suspension, my wife remarked: He deserved it. 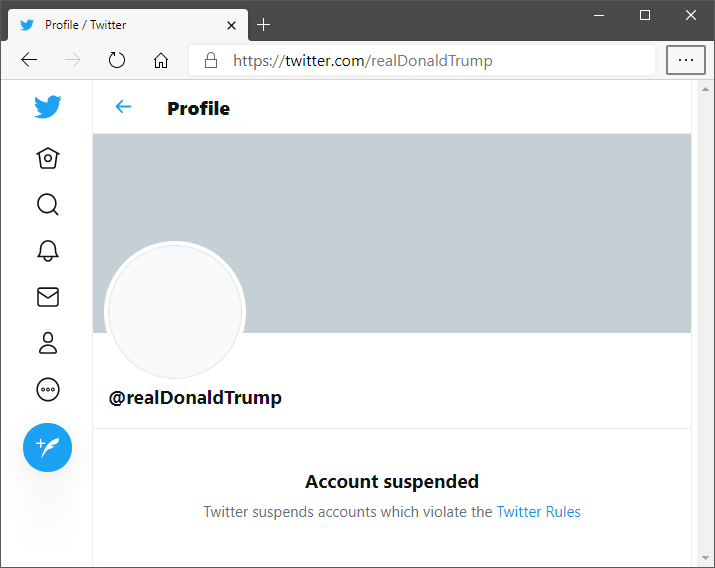 He certainly did, but I am still of two minds about this one. More importantly, I am not at all certain that it is wise to call for criminal prosecution against him after he leaves office.

Not that he doesn’t deserve it. He deserves it a hundred times over.

But asking what he deserves is the wrong question.

Here is the right question: What will make the world, American democracy in particular, a better place years from now?

Vindictively dealing with politicians, no matter how badly they deserve it, is unlikely to accomplish that. In fact, it may create a precedent that will make it that much harder to remove future miscreants from office, that much more likely that they’ll cling to power, through unlawful means if necessary.

And make no mistake about it: the next wannabe despot will be a lot smarter, a lot more skillful than Trump.

And for all we know, the next wannabe despot will be driven by a bigger-than-life ideology, a messianic complex, a desire to change the world, as opposed to mere narcissistic, infantile egocentrism. And that person will be a lot more dangerous than Trump has ever been.

So this is what the US Capitol building looks like today: Apparently, for some folks “democracy” is synonymous with “my way or the highway”, and they are willing to destroy democratic institutions to prevail. The pictures are beyond shocking. This is the kind of shit that we usually see coming from failed states in remote corners of the world, not the United States of America.

This is not the road to democracy. This is unadulterated fascism, and it’s not some exaggeration a’la Godwin’s law: This really is it.

I am thoroughly, thoroughly disgusted with Trumpists.