Not a day goes by in Ottawa this autumn without news of yet another service interruption with our brand new light rail transport system.

You’d think that reliably operating an urban rail network is not exactly high science in 2019; especially considering that 60 years earlier, this town had an extensive network of streetcars, which operated reliably for 68 years. 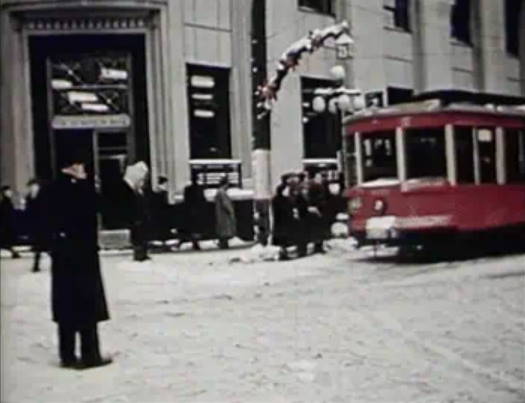 Sadly, that network fell victim to the myopic urban planning trends of the postwar years, which also saw streetcar networks destroyed, or at the very least, severely diminished, as in the case of my city of birth, Budapest, where, for instance, a once popular streetcar line was replaced by an overpass carrying vehicular traffic to an already congested downtown core. 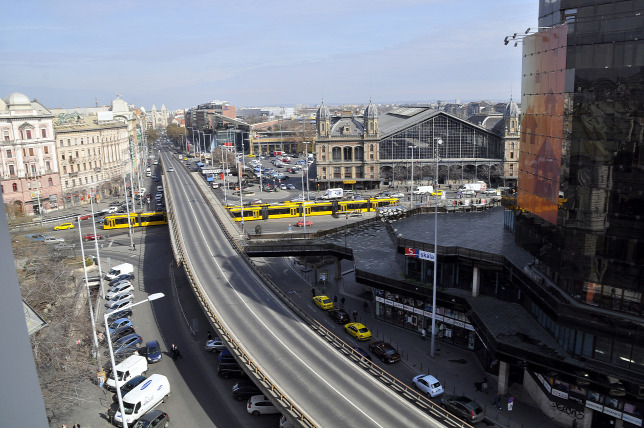 And now we have an LRT that is made unreliable, in part, by a risk-averse culture in which an entire urban transportation system is shut down because of a single door’s failure to close properly.

The other day, I used an analogy to describe the likely result of trying to understand a scientifically or technologically complex issue from the media, from political pundits.

Imagine you lived your entire life in a windowless room, but you heard that outside your room, there is this thing called the sky, and it has a color. But you hear conflicting opinions. One side insists that the sky is red, absolutely red, has never been anything other than red, redder than a boiled lobster’s arse as a matter of fact. The other side tells you that the sky is, and has always been, green and anyone who ever said that it was red is a liar, a cheat, committing a crime against humanity. 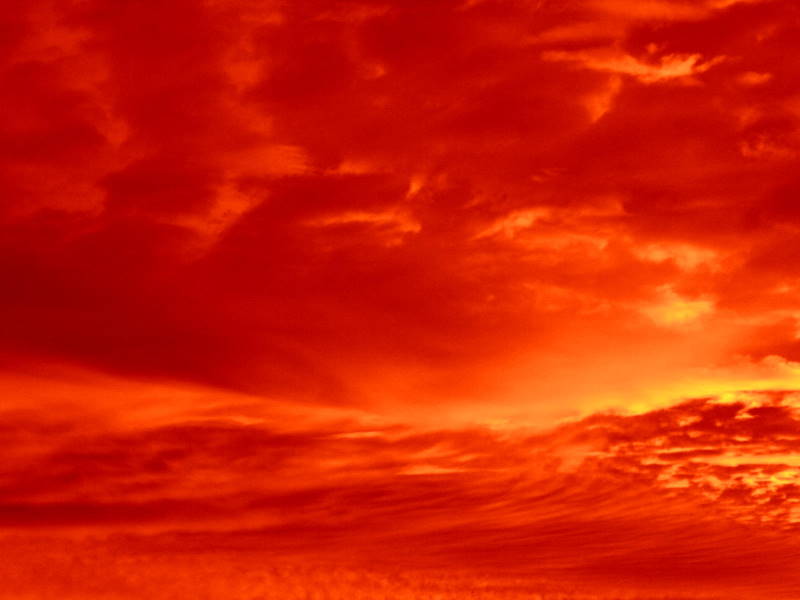 So by carefully considering both sides, cautiously and meticulously balancing the conflicting views, you finally arrive at the conclusion that the color of the sky is… What exactly?

Chances are that you will never guess its true color.

But wait, it gets even worse. In real-life debates, it is not always red-sky vs. green-sky. Sometimes it is red-sky vs. blue-sky. That is to say that at least some of the time, one side will, in fact, be representing the truth (or at least a reasonable facsimile of the truth.) By giving both sides a balanced opportunity to convince you, then, you are in fact farther from the truth than you would be if you had simply picked the right side in the first place. But how would you know which side is right?

In the end, you’d have to make an actual observation or read the scientific or technical literature, instead of listening to pundits. But this puts you in a difficult situation. Stuck between the red-sky and the green-sky side, you’ll learn what it’s like not to have any friends. But getting stuck in the red-sky vs. blue-sky debate makes it even worse, because now the red-sky folks will see you as just yet another diehard biased blue-sky fan, while the blue-sky folks will think that you are one of them, that you bought into their religion instead of arriving there by way of sound reasoning, and the moment you actually contradict some aspect of their dogma, you will be branded a traitor or worse.

Welcome to the post-truth world.

Last night was the 30th anniversary of the beginning of the demolition of the Berlin Wall.

It was a momentous event. I spent days glued to CNN, watching things unfold and wondering if I was witnessing the beginning of a new world order or prelude to nuclear Armageddon.

Yet here we are, three decades later, alive and kicking, and still no world war in sight (though looking at global politics in the past decade, I cannot say that I am not worried.)

For now, though, here is a nice picture with which to celebrate, courtesy of a Twitter account dedicated to giant military cats. 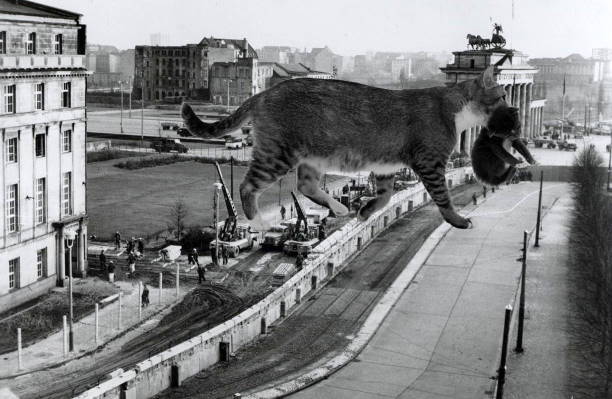 OK, these days I tend to have mostly liberal political views. Trump gives me the creeps. Though not with great enthusiasm, but I rooted for Trudeau over Scheer. More broadly, I prefer a welcoming, open, tolerant society over one that is isolationist and xenophobic. I prefer a comprehensive social safety net even at the expense of higher taxes. And as a middle-aged white man, I am not the least bit worried that I am being marginalized by women or visible minorities; quite the contrary, my concern is that both women and minorities still often face prejudice and stereotypes, and have to fight uphill battles.

But every once in a while, I run into things that just make me want to root for Trump. As in, “in your face, you clowns”.

Like, when, a license plate that clearly alludes to a Star Trek meme is suddenly banned because some social justice warrior finds it offensive. 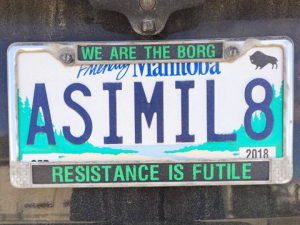 A perfectly ordinary English word is now banished from Manitoba license plates because it happened to remind someone of the sad history of aboriginal Canadians.

Yes, it seems that resistance is indeed futile. When SJWs arrive, you will be assimilated. And you will not even be allowed to say so, because the word itself gets banned and you’re only allowed to use words from the list approved by Ministry of Tolerance or whatever.

Darn it, let me present my own, slightly modified version of this license plate, appropriate for this occasion I believe: 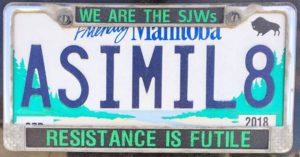 Just to make it clear, it is not my intent to make light of the suffering that Canada’s aboriginal population experienced for many generations. The cultural genocide, sexual abuse, forced assimilation, broken up families, broken lives, economic deprivation, not to mention all the things that are still going on, from chronic unemployment and inadequate medical care to the lack of clean drinking water (in a supposedly first world country!)… These are all real tragedies, tangible problems and it is Canada’s shame that they remain largely unsolved in 2019.

But none of these problems will be addressed by this cottage industry of phony outrage over ridiculous things like a dictionary word on a bleeping license plate or the words of a 1940s popular song. If anything, letting people supply their own context and find offense in everything achieves the exact opposite. It cheapens genuine, real concerns and subjects them to ridicule, ultimately harming the very people that these fearless warriors of political correctness are pretending to defend. In reality, of course, that’s not what they are doing. Rather, they are Trump’s counterparts on the opposite end of the political palette: narcissistic poseurs, infantile hypocrites playing the self-aggrandizing role of valiant defenders of the faithful.