Can both climate alarmists and climate deniers be right (or wrong) at the same time? Perhaps so. At least that’s my understanding after reading about a new study that was designed to evaluate the judgment of climate experts.

In any case, consensus is irrelevant. Science is not supposed to be a democracy of scientists, but a tyranny of facts.What makes a scientific theory right is not consensus but logical consistency and good agreement with observation.

Unfortunately when the debate becomes political, such nuances are often lost or ignored. Politics, especially populist politics, abhors uncertainties and prefers to paint everything in black and white. If uncertainties are mentioned at all, they are merely used as “proof” that the other side is wrong, therefore our side must be right, with no room in the middle. You either believe Al Gore’s Inconvenient Truth like the gospel, or you accuse Al Gore of being a fraud artist out to get rich on phony carbon credits.

Welcome to Ottawa, Your Majesty. 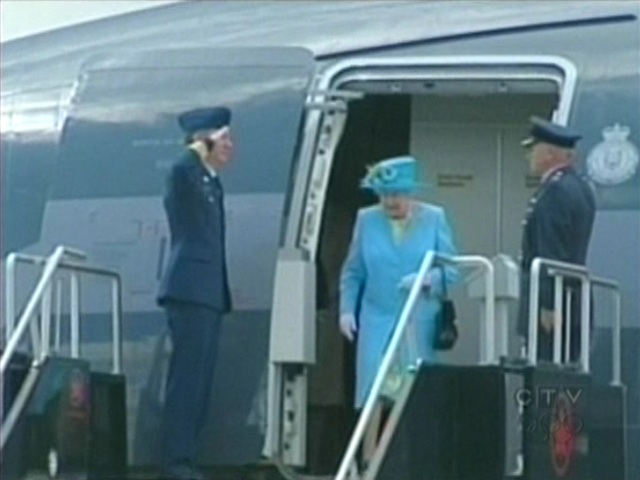 I hope that when I reach the tender age of 84, I’ll look at least half as healthy as she does. (And, er, yes, in case anyone is wondering, I am indeed a supporter of the monarchy, a loyal royalist if you wish.)

So on the one hand, we have leaders who seem unable to make sensible decisions about governing the world without being able to smell each other.

On the other hand, we have professional protesters who protest all the time, even when they don’t even know what it is their protesting against.

Then, on the third hand, we have thugs and hooligans who think that using a political event like a G20 meeting is a good excuse to smash shop windows and burn police cars: 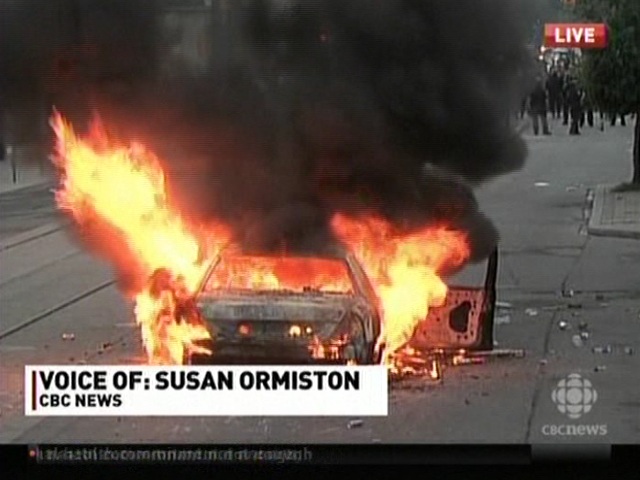 As a result, we have reporters who need a personal bodyguard while reporting from the streets of downtown Toronto (what is it, Beirut? Kabul?): 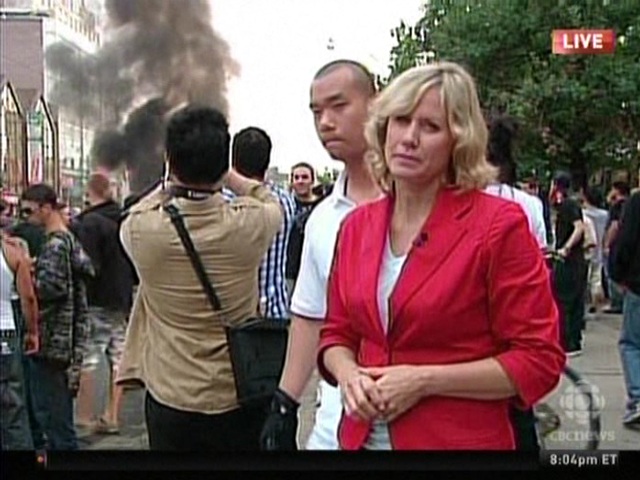 And we have intimidating walls of policemen, trying to maintain some semblance of order: 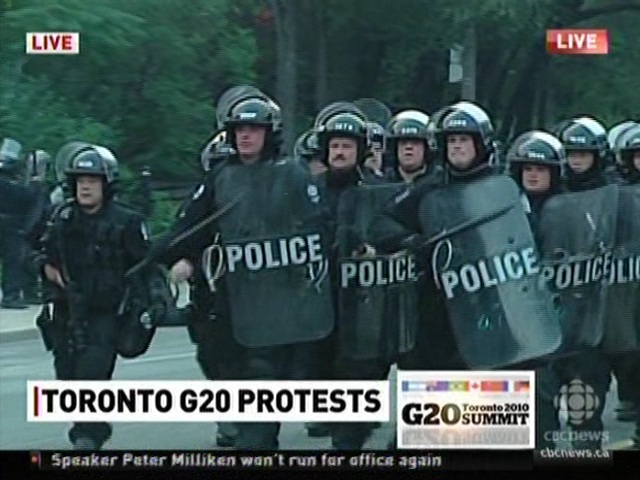 All in all, must have been a lovely day in Toronto. All of which was about to prompt me to make a wise remark about living in the brave new 21st century, but hey! We’re a full decade into the new century and so far, we had no world wars, no nuclear explosions, not even too much by way of genocide (let’s not forget Sudan, though). So perhaps there’s hope for us yet…

Ouch! That was quite the rumble. Enough to freak out all the cats. This is the third significant earthquake I experienced here in Ottawa; it may not have been the strongest as measured by instruments, but it certainly felt the most, hmmm, “hostile” sounds like the right word.

So this McChrystal guy cannot keep his mouth shut, and now he’s summoned to the White House. I am sure he’s going to get an earful from Mr. Obama.

Or perhaps there’s a bigger conspiracy here? I cannot help but think of all the science fiction thrillers in which the renegade general uses a ruse just like this one to get in the physical presence of a despised political leader…

OK, I probably read or watched too much science fiction over the years.

Many predicted that once FIDESZ was in power, especially with a two thirds majority that allows them to modify the country’s constitution without opposition support, they will turn their back on democracy. While I had no illusions about the FIDESZ leader, Viktor Orban (he may be portraying himself as the leader of pro-democracy, anti-Communist forces but all too often, his behavior and mannerisms remind me of the country’s pre-1989 Kadar-era elite), I had no such worries: political parties come and go, but 20 years after the collapse of Communism, the democratic institutions of Hungary, a member of the European Union, seemed solid and stable.

Now I am not so certain. FIDESZ introduced a media bill in Parliament that seems to confirm some of the worst fears of their opponents. Is Orban really aspiring to become Europe’s next Lukasenko? I wish I could answer that question with a firm negative.

I keep telling myself that I should not care. I live in Canada, and while I may occasionally doubt Stephen Harper’s prowess as Prime Minister, I have no reason to doubt his commitment to democracy. So why should I care about what happens in a teeny little country in the backwaters of Europe, full of delusions of grandeur and outdated, obsolete political ideals worshiped by its “Christian middle class”?

And, truth to tell, I care less and less. I still care because my parents live there and might suffer as a result of a government gone berserk. And, I occasionally meet Hungarian expats here who don’t realize that 1956 was more than half a century ago as they celebrate the “defeat of the Reds”. (Replaying a revolution that never happened was a recurring theme in the FIDESZ political rhetoric, too.) Other than that… if the majority of Hungarians really believe that this is the route to the country’s salvation, well, enjoy.

Ottawa police is asking us to be vigilant. I am not sure what they mean.

I have a neighbor who is from the Middle East. Should I call police and warn them that he may have anti-Western sentiments?

I have a friend who has expressed leftist, dare I say anarchist, views on occasion. Should I call police and warn them that he may be a troublemaker?

Come to think of it, my own views of the authorities are not altogether charitable either. Can I be trusted? Or should I call police just in case and denounce myself?

BP’s chairman, Carl-Henric Svanberg, responding to questions from journalists, described the residents of the Gulf states as “small people”.

Many suggested that this gaffe should be ignored, as the chairman is from Sweden, he is not a native speaker of English, and in his mother tongue, the term is commonly used to describe average citizens, small businessmen, and the like.

Now it so happens that I am not a native speaker of English either, and my mother tongue also has a phrase, translated literally into English as “small people”, but used the same way as it is used supposedly in Swedish.

So how come I almost fell off my chair when I heard Svanberg’s remarks during the televised news conference?

Hayabusa, or at least the part of it that was meant to survive atmospheric re-entry, has returned. Hayabusa, also known as MUSES-C, is a Japanese spacecraft, the first ever asteroid sample return mission. Unfortunately it is not yet clear if it has actually managed to collect any samples. Even so, it’s been one impressive mission.

I admit: I really thought Obama was better than this.

Back after 9/11, the moronic Bush administration shut down all commercial air traffic for days in a knee-jerk reaction that exaggerated the economic fallout of the 9/11 attacks possibly by orders of magnitude. (None of which prevented them from chartering special flights to help Saudi nationals, including members of the Bin Laden family, flee the United States in haste. But that is another story.)

Now here’s this oil rig disaster in the Gulf of Mexico. To be certain, there exists a serious need to review how these rigs are licensed, how they are operated, and whether or not future drilling is worth the economic risk. But shutting down on-going drilling operations? Not only does it do grave economic harm to an already heavily affected region, it may actually increase the risk of another spill.

If this is how Obama continues his presidency, I don’t know what will save us from seeing Sarah Palin and her friends move into the White House in January 2013. Now there’s a scary thought.

That is the tough lesson guardians of the East German workers’ paradise learned: once you build a Wall along the border, you must be prepared to kill in order to maintain its usefulness and integrity.

It is no different along the US-Mexico border; whatever it is that people think is worth protecting by building a Wall (something that is quintessentially anti-freedom: a device constructed for the sole purpose of limiting people’s freedom of movement, to maintain some kind of a political or economic status quo), such a Wall cannot stand unless its guardians are willing to kill. Kill, if necessary, even a 15-year old teenager by shooting him in the face.

Perhaps someone who has one of those medals in his possession that Honecker used to give his border guards would mail it as a gift to this fine US border agent in appreciation for his bravery.

To all the smartalecs on support forums out there: what the hell is wrong with you? If I ask someone with a map about the route from town A to B, I expect them to tell me directions, not question my sanity for wanting to drive to town B in the first place. Similarly, if someone posts a question in the form of, say, “I have device A giving error message B under operating system C, how do I solve this problem?”, the one thing they are absolutely, positively NOT interested in is lectures such as “Why would you be using device A?” or “What kind of a moron still uses operating system C?” and the like. If you don’t know the answer, can’t you just shut up and not pollute Google searches with your asinine remarks?

For instance, today I was trying to use a floppy disk. (Yes, people still need floppy disks sometimes. Not because they live in the stone age, but because they may be using a floppy to update a motherboard BIOS, for instance.) I ran into a problem. I searched Google, and found a support forum where a similar problem was discussed. There were a few helpful answers. But then, look at this little exchange:

How bloody helpful. This really told the guy how to fix the floppy disk problem that he was seeking help for.

Greenpeace had a contest to redesign the BP logo. Here’s my favorite: 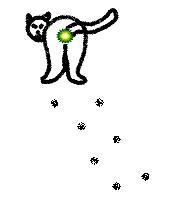 Yes, I am partial to cats. Though truth to tell, I hesitated… at this point in time, a cat’s hind hole seems a lot nicer than anything BP does or says.

Netanyahu tells the world that members of the Israeli Navy were met “by a vicious mob” on board those humanitarian boats that they attacked. Very well… let me take everything Israel says at face value. Let me assume that everything happened exactly as the Israelis say.

So what? The boats in question were attacked by the armed forces of another nation on the high seas. That, last time I checked, is called piracy. And the crew of any boat have the right to defend their boat against pirates, if necessary, even by acting as a “vicious mob”.

The other day, I updated the Java VM on this machine, and as part of the process, I uninstalled the previous version. During the uninstallation process, I was presented with the following dialog:

I’m not sure what purpose the checkbox in this dialog serves. By checking it, do I suppress the confirmation dialog for all future uninstallations? That doesn’t sound smart. But what is the alternative? A checkbox that serves no purpose other than helping me avoid having to click the mouse one extra time just in case I happen to reinstall, and then uninstall, the 6.19 version of the Java VM?