Black lives matter. No argument there.

But, unfortunately, so does messaging. Dr. Göbbels knew this. The communists also knew this, hence their emphasis on “agitation and propaganda”. But, truth to tell, unlike the Third Reich, the left always sucked at it. That’s why, in Kádár’s Hungary, for instance, instead of being content with a regime that delivered a solid system of universal health care and a consistently high quality public system of education that included free tertiary education, we joked about living in the “happiest of the barracks”, took the regime’s successes for granted without acknowledging them, and grumbled daily about its numerous shortcomings.

The political left seems to be intent on continuing this tradition. Their messaging sucks. 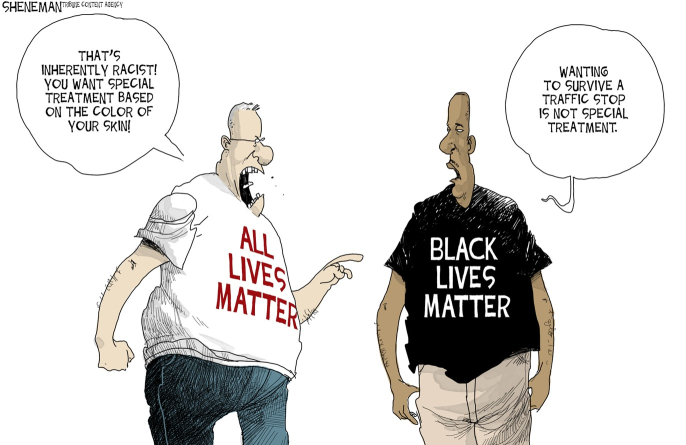 A few days ago, I grumbled about the Mayor of London who proclaimed that there are too many white men in science and engineering.

Not too few women. Not underrepresented minorities. Not the need to increase the appeal and accessibility of science and engineering professions to women and minorities. Nope. Too many white men. The resulting backlash was both predictable and completely unnecessary.

Meanwhile, self-righteous warriors of the progressive left declare people like J. K. Rowling a public enemy. Shouldn’t someone with her storytelling prowess be enlisted as a friend and ally? No… deviate in the slightest from the unwritten standards of leftist orthodoxy, and you are labeled a backward, hateful somethingophobe. Like the California university professor who dared to mention a common Chinese expression in his lecture on communication: “na ge” (那个), a common pause word. Oh, how the righteous pounced! This insensitive white professor must be secretly a racist white supremacist! How dare he utter a word that sounds like, well… dare I write it down? Or do I, too, have to fear repercussions from the thought police if I dare spell out the infamous N-word in its entirety? The incident drew criticism from Chinese students and comparisons to Mao’s cultural revolution, and they were not wrong.

Then there are these calls to “defund the police”. The first time I heard this expression I was perplexed. Sure, I know there exist crazy anarchists who want no uniformed authority whatsoever on our streets, but I was also certain that this was not the meaning that the expression was intended to convey. And I was right. The original intent is to divert funds away: let the police do policing when they must, but use the funds wisely, to prevent those cultural and socioeconomic circumstances that lead to situations that need policing in the first place. Makes sense, right?

But that’s not the message that a call to “defund the police” conveys. Many who are rightfully angered by police excess want to, well, literally defund the police. And now their voices are amplified beyond reason, seemingly representing mainstream progressive attitudes. Needless to say, that’s all their opponents need to spread fear and concern among their followers: Look, they tell you, these leftist idiots, these commie anarchists want to leave your streets unprotected from thieves and murderers! They want to turn your country into a failed state like Venezuela!

But when you just say, “black lives matter”, you hand a propaganda victory to your opponents on a silver platter. Even a stereotypical redneck, undereducated and unintelligent, can retort easily with “but I thought all lives matter!” and gain the moral upper hand.

I happen to support many (most? all?) key progressive ideas. I do think black lives (also) matter. I do believe it is a good idea to attack socioeconomic problems at their roots as opposed to just policing the consequences. I understand that words can hurt, dehumanize, and contribute to systemic racism. I do agree that we must do better to involve women and minorities in science and engineering professions.

But, dear progressives, when I look at your messaging… continuing a century-old tradition, you remain your own worst enemies. 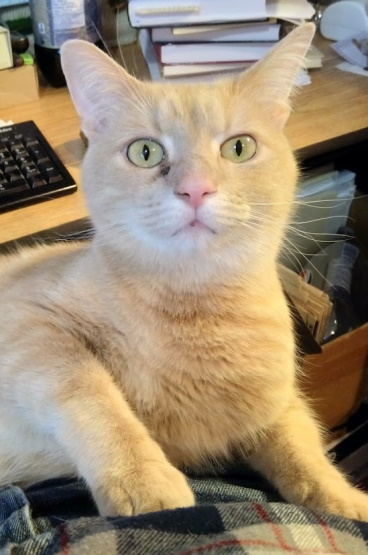 Freddy has been with us for more than two years now. He is a very funny cat. Strong-willed, to be sure; he might even bite you if he disapproves of your behavior. (No, he has not bitten off any fingers or earlobes yet.) And he likes… green peas. Or kernels of corn. And like one of our past kitties, Pipacs, Freddy also stole a freshly cooked potato from the kitchen not too long ago.

Last but not least, I should mention that his favorite toys are small pompoms. We have many of those, on account of my wife’s knitting. So I have a box of pompoms right here, next to my desk. Freddy often shows up here and, after carefully sniffing the pompoms, selects one, takes it from the box, puts it down on the floor and sits down proudly next to it, quietly meowing a few times. That is my cue to pick up the pompom and throw it down the stairs, with Freddy sprinting after it. Often, he then spends a good half hour playing with that pompom.

He also occasionally plays with his somewhat larger buddy, Rufus. I suppose Rufus looks just like a big gray-and-white pompom…

My success story of the day involves two cups.

A few days ago, I heard my wife grumbling loudly in the kitchen. I went downstairs to see what was wrong. She showed me a pair of cups, a teacup, inside which there was one of our brand new espresso cups.

And when I say inside, I mean wedged inside. Firmly and utterly stuck, quite impossible to remove. 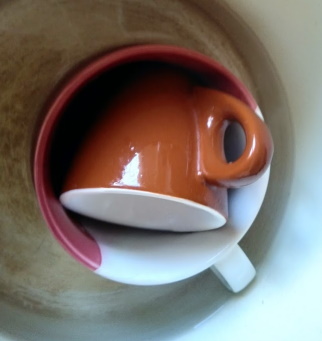 We tried to separate them using force, but they wouldn’t budge. We obviously didn’t want to break either cup. Not that they are terribly expensive but the teacup, well, we’re quite fond of these teacups and as for the espresso cup, it was brand new, I only just purchased the set off Amazon a few days earlier.

Force failed to do the trick so we tried to be clever. Use some oil to make it slick? Nope. Dishwasher detergent? That didn’t work either. I tried holding the outer cup, upside down, under hot water in the hope that thermal expansion might loosen the smaller cup inside; nope.

Nonetheless we thought that a temperature difference might help, so we filled the cups with water and put them in the freezer. Once the water was frozen solid, we took them out and placed them in a pot of boiling water. Again, the hope was that the high heat would cause the larger cup to expand, while the ice keeps the smaller cup cold, allowing it to fall out. Nope.

After this experiment failed for the third time earlier this afternoon, I sat down with the cups in hand and once again, tried brute force. The outer cup was still quite hot to the touch, the inner cup still quite cold and this may have helped; suddenly, I felt them budge, and after one more pull, they were separated, completely undamaged. 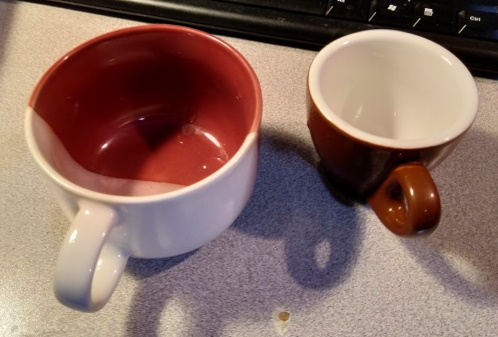 I was… absolutely delighted. Later I remarked to my wife that we humans are creatures of simple pleasures. Never mind the animations I completed just today using gravitational lenses of arbitrary shape. Never mind the work I am doing on another project on payment processor integration, or yet another project involving Microsoft Teams. (Yes, I multitask. Virtual desktops can be quite handy.) All of that is fun, sure, but it’s having been able to separate these poor cups without breaking or damaging them that really made my day.

You know, I am beginning to sympathize with all those Trumpists, Fake News afficionados, anti-vaxxers, flat Earthers and the like.

The other day, I commented on a post concerning the 34 Ottawa area pharmacies that are designated as AstraZeneca vaccination sites by Doug Ford’s government.

I disagreed that this was a political decision, despite the fact that I didn’t vote for Mr. Ford, and that, in fact, I voted for the MPP in question who raised this issue in the first place. I suggested that we should leave such hyperpartisan politicking to our American friends. Last but not least, I was able to find some mapping data from StatCan and from a Twitter post (which I can no longer find — thanks for nothing, Facebook!) that, when overlaid, showed that the vaccination sites roughly correspond to the population density map of the Ottawa region.

Facebook, unfortunately, concluded that my post goes against their community guidelines as spam, despite the fact that (I swear!) I was not trying to sell any Russian brides, fake PPE, dubious cryptocurrency investment schemes, or steal anyone’s social insurance number.

None of it ever stopped Facebook from delivering Trumpist garbage, genuine Fake News, anti-vaxxer nonsense, even flat Earth propaganda to my account.

My beautiful wife is getting really good at this.

She just made this kalach (kalács), Hungarian style braided sweetbread/eggbread, on account of Easter. 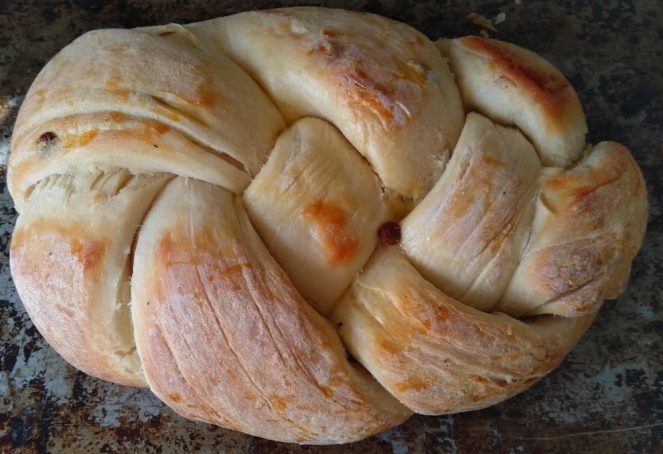 It is absolutely yummy for breakfast. Might work for lunch and dinner, too, if you ask me.

Yes, it has raisins in it. I love kalach with raisins.