A new study, widely discussed in the news (I first heard about it on CNN this morning) suggests that portions may have increased gradually over the centuries, if depictions of one of history’s most famous suppers, the Last Supper, can be believed. To account for differences in dimensions, the researchers compared serving sizes to the heads of people depicted, and concluded that over the centuries, portions may have grown by as much as 69%.

There is, of course, another possibility. Perhaps it is people’s heads that shrank.

Imagine solving one of the most profound outstanding problems in mathematics. Imagine living in poverty, in a cockroach-infested apartment in St. Petersburg, Russia. Imagine being awarded one of the world’s most prestigious prizes in science, the Millennium Prize of the Clay Mathematics Institute, which, incidentally, also comes with a cool $1,000,000.

And imagine turning it down. Which is precisely what reclusive Russian mathematician Grigory Perelman apparently did.

I don’t know what to think. Was it a matter of principle for him? Perhaps. But then, he could have indicated in advance that he wouldn’t accept the award, just as he refused to accept the Fields Medal a few years earlier. Why did he keep the world in suspense? Was it posturing? Or is he, hmmm, how can I put this politely, one fry short of a happy meal, to use a favorite phrase of mine from the television series Stargate SG-1?

I drove coast-to-coast and back across the North American continent twice already, and doubtless I’ll do it again. I love long road trips. In another life, I might have become a trucker.

Here’s a road trip that I’d really enjoy, were it not for the severe lack of security in places (especially if you’re driving a vehicle with a North American license plate): 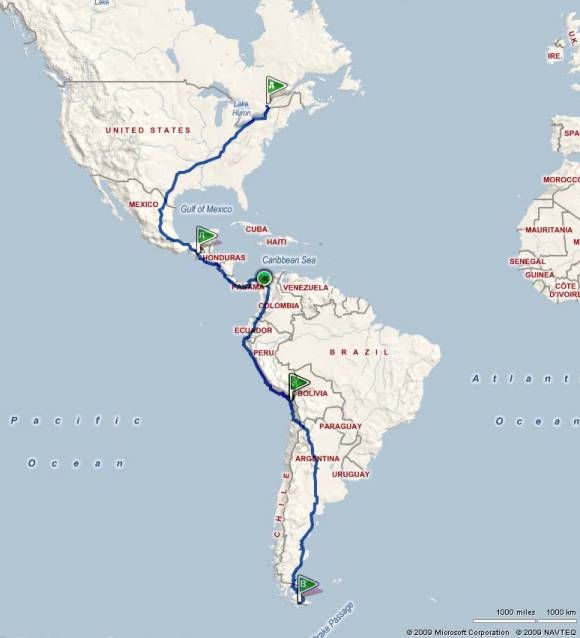 I needed Microsoft Bing to build this trip, and I had to do it in three segments [1, 2, 3]. Anyhow, it’s about 17,500 kilometers, and might require 188 hours of driving. There-and-back… sounds like a two-month vacation.

An interesting anniversary today: 25 years ago, on March 15, 1985, the first ever .com domain name was registered, symbolics.com. The company, in addition to building their own brand of “Lisp Machine” computers, also happened to be selling the commercial version of the MACSYMA computer algebra software. The same software that, in the form of its open-source version, Maxima, continues to evolve thanks to a devoted team of developers… of which I happen to be one.

Alas, Symbolics is no longer, at least not the original company. A privately held company by the same name which obtained much of Symbolics’ assets still sells licenses of the old MACSYMA code.

Like any good geek, I like computer games. I’m not obsessed by them (the image of Comic Book Guy from The Simpsons serves as a powerful deterrent) but I do enjoy the occasional play. And I certainly have the disposable income to buy a new title when it comes out.

Except that I haven’t bought a new game in years. Ubisoft’s official explanation about their “always on” digital rights management system is a good example why. A company that needs to know every time I am playing, a game that kicks me out of my Internet connection drops momentarily… why would I want to pay good money for that? Come to think of it, why would I even want something like that for free on my computer?

I have no statistics to prove it, but I think  DRM does far more harm than good. It may (or may not) deter piracy. On the other hand, I bet that the number of customers alienated and put off by DRM far exceeds the number of those who suddenly see the light and, as a result of DRM, start paying for stuff they previously stole. So the net result may very well be a decrease in sales.

Perhaps one of these days, software, especially game software companies will come to their senses again and realize this. Until then, I’ll just enjoy the occasional shootout with some heavily pixelated aliens in Duke Nukem.

Here’s yet another dramatic prediction by the Intergovernmental Panel on Climate Change (IPCC): that even a small temperature increase can lead to the loss of up to 40% of the Amazonian rain forest.

Except that it won’t. New research shows that there were no significant changes in the Amazon during the 2005 drought compared to previous years (also refuting previous speculation that drought might in fact help the rain forest grow). Like the prediction about Himalayan glaciers, the IPCC’s alarming statement was based solely on a non-peer reviewed report by the WWF (formerly known as the World Wildlife Fund, but no longer).

Defenders of the “scientific consensus” argue that small discrepancies notwithstanding, the findings of the IPCC are unassailable, the case for anthropogenic global warming is solid, and that the ones casting the first stone should be those who’d never leave a few innocent mistakes in a giant 1000-page report. If this was all there was to it, I should really keep my mouth shut; I’ve made more than my fair share of embarrassing mistakes in the past in stuff I wrote, and no doubt, I’ll make equally embarrassing mistakes in the future.

But these are not innocent mistakes, not small errors that only nitpickers care about, not even gross errors that can be attributed to carelessness. We’re not talking about a typo here, an omitted reference or erroneous formula there, an improperly drawn conclusion somewhere else. What we have here is the purposeful inclusion of non-peer reviewed material simply for its shock value. And not just in footnotes. This statement about the rain forests leads the section about Latin America, in the IPCC 2007 WG II Summary for Policymakers:

“By mid-century, increases in temperature and associated decreases in soil water are projected to lead to gradual replacement of tropical forest by savanna in eastern Amazonia.”

The body of the text that the summary refers to contains further alarming detail:

“Up to 40% of the Amazonian forests could react drastically to even a slight reduction in precipitation; this means that the tropical vegetation, hydrology and climate system in South America could change very rapidly to another steady state, not necessarily producing gradual changes between the current and the future situation (Rowell and Moore, 2000).”

The cited paper by Rowell and Moore is the non-peer reviewed report produced by the WWF, containing some dramatic language such as “the year the world caught fire”. Nonetheless, the authors’ prediction is not near as dire as the IPCC’s version, for which their paper is named as the sole source. Rowell and Moore only say that “up to 40% of the Brazilian forest is extremely sensitive to small reductions in the amount of rainfall.”

Don’t get me wrong, I firmly believe that the Amazonian rain forest is in serious trouble. You don’t need climate change for this… logging will do the trick nicely.

What I find inexplicable and unjustifiable is the IPCC’s decision not only to include such a striking prediction based solely on a non-peer reviewed source, but even embellish it. The IPCC’s report is supposed to be an objective assessment of the best science available, based upon which trillion dollar decisions will be made, affecting the world economy for generations to come. Instead, at least some sections of it look more like an activist’s pamphlet.

By undermining trust in the integrity of the science, the IPCC may be doing grave harm to the very cause it champions. The scientific evidence may be stronger in the future: the models will improve, and one day, will have real predictive power, the ability to reproduce accurately observed changes in the climate after a certain date using data available up to that date. At that time, we may yet find that the situation is even worse than we thought. Question is, will people still listen if the scientific community discredits itself now by crossing the line between science and activism?

25 years ago today, Mikhail Gorbachev became General Secretary of the Communist Party of the Soviet Union. I don’t think I noticed… indeed, other than new slogans like “glasnost” and “perestroika”, which were mostly just words, the system seemed just as crumbling as before. Perhaps even crumbling a bit more… Gorbachev’s rise to power occurred, after all, a mere two months after the Comecon’s worst energy crisis, marked by shortages in natural gas and a massive collapse of the electrical grid. And then, a year later, it was Chernobyl’s turn. Did anyone need more proof that Communism was, even under the best of circumstances, a social system incapable of providing a sustainable, safe, secure, prosperous life to its citizens?

Nonetheless, I had no reason to suspect that Communism would vanish anytime soon. Indeed, I don’t think there was anyone in Hungary in 1986 who would not have considered it a safe bet that the Soviet empire, along with its one-party vassal states in Eastern Europe, would be around for at least another 25 years. These views played a major role in my decision to leave Hungary in 1986. A decision I never regretted, but still… who would have thought that just three short years later, the Berlin Wall would come down and not long after that, the flag of the USSR would no longer fly over the Kremlin?

So here’s a curious question: why is it that I was able to upgrade Microsoft Virtual PC from version 2004 to version 2007 and it did NOT require a reboot… but when I installed a security update to version 2007 (making sure that Virtual PC as well as all its drivers are actually shut down) a reboot was necessary?

I don’t think I’ll ever figure out this Microsoft reboot misery.

You can tell that this picture was NOT made in Ottawa today because it’s presently 8 degrees Centigrade here, and the sun is still shining: 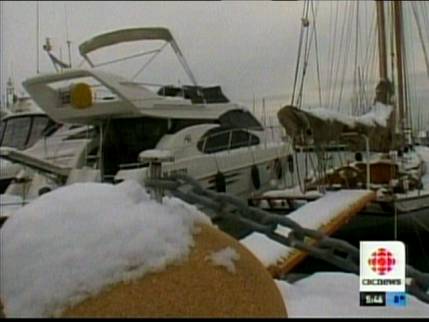 No, this video frame is from the French Riviera.

There are times when I like capitalism. Tropicana’s new commercial, bringing the “sun” to a Canadian community north of the Arctic Circle in the middle of January is one example:

Every time I think about it, I feel compelled to think again: geologic changes are NOT supposed to happen in the blink of an eye, on a timescale of a mere 10,000 years. Yet at the very place where I live, Ottawa, a little over 10,000 years ago whales were swimming. How is that possible?

The answer is isostatic rebound. Up until about 13,000 years ago, this region was covered by the remnants of the last ice age, a layer of ice up to three kilometers thick. When this ice receded, the region was flooded by the sea, whales and all. This subsea was called the Champlain Sea, and may have been as much as 150 meters deep right here where I presently sit.

However, once the huge weight of the thick ice layer was gone, the Earth’s crust underneath rose up. This process is known as isostatic rebound. In a mere 3,000 years, the Champlain Sea was gone.

I suppose the same ice layer was also responsible for leveling the Ontario landscape such that this huge province, perhaps as large as France and Germany put together, has no point higher than 693 meters above sea level. Even tiny Hungary beats Ontario by more than a thousand feet!

I can see why people find geology fascinating.