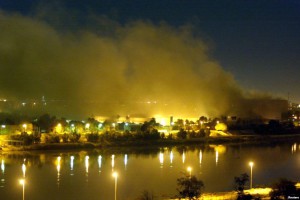 I was already blogging 10 years ago, perhaps blogging more than these days as before the advent of social media, almost no-one ever yelled back. Anyhow, we are now rapidly approaching the anniversary of the day I dubbed “black Thursday” in my blog (I actually changed the background color to black, causing me no small amount of grief when years later, I converted my static HTML blog by writing a simple homebrew blog engine and I had to write workaround code to process the custom formatting.)

Back then, I used to express my disappointment and disgust with the campaign of lies that led up to this war by presenting some relevant statistics in my blog. Perhaps this is a good opportunity to do it again:

And the end result of this valiant effort? Iraq is now strongly under the influence of Iran, which became a major regional power that is no longer contained by Saddam Hussein’s regime. The credibility of the United States remains low. The United States economy is hindered by a recession that is combined with debt-to-GDP levels unprecedented since the end of WW2.

And it took another president, Barack Hussein Obama, to find and kill the mastermind behind the September 11 attacks, Osama bin Laden… who, incidentally, was not in any way connected with Saddam Hussein’s regime.