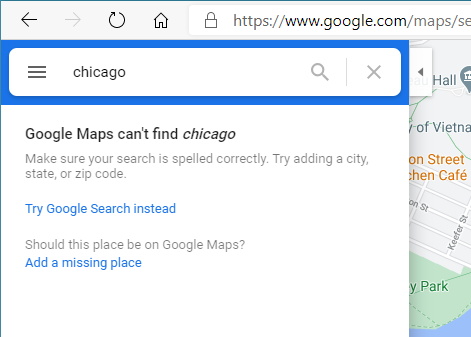 My mind just got blown. No, it’s not photoshop. Nor is it a movie prop.

Back in the 1950s, 1960s, early 1970s there really was regular bus service connecting the city of London, United Kingdom, with Calcutta (now Kolkata), India.

I think what really blew my mind was not that the roads were there. Of course. But that a bus, obviously from a Western capital, carrying unarmed passengers, could safely travel through this route. Sure, passengers needed a multitude of visas, even crossing the Iron Curtain (twice!) but nonetheless, the route had to be safe enough, roadside services had to be reliable enough, and the authorities along the route had to be trustworthy enough for a bus operator to be able to offer this regularly scheduled service. Of course things didn’t stay that way. The India-Pakistan border has become less open each passing year. Afghanistan went to hell in a handbasket with the Soviet occupation, the Taliban, the American invasion in the wake of 9/11. Iran turned into a theocracy with the Islamic revolution. Yugoslavia went up in flames in a bloody civil war. Today, it would be quite impossible* to organize reliable bus service from London to Kolkata.

I cannot help but wonder what it must have been like, for a child in Kolkata, Kabul, Lahore or Tehran, looking at this bus and imagining that faraway, fabulous city of London. I used to feel that sense of awe a little when, as a child in behind-the-iron-curtain Budapest, I saw trains departing the railway station for faraway, magical places like Vienna or Paris; but those were a lot closer, a lot more accessible to us in Budapest than London must have been to a 6-year old on Kabul or Lahore in 1969.

*Or maybe not: Apparently there is an effort under way to establish a bus route, with a gigantic detour through Myanmar, Thailand, China and Russia. I wish them luck.

OK, it’s not quite September yet, but the time has arrived to revise my 2020 calendar a little. What next, pray tell?

I keep reading about ancient Rome. Part of the reason, of course, is that every so often, looking in particular at American politics, I wonder if we are witnessing history repeating itself.

But there was a lot more to ancient Rome than politics and palace intrigue.

Take their roads. They knew how to build roads! Holy Roman macaroni, some of the roads built two thousands years ago are still in use! And there were a lot of roads in ancient Rome. Apparently, they had some 80,000 km of paved roads, and several hundred thousand kilometers of additional roadways criss-crossing the realm.

An Internet data scientist and cartographer, Sasha Trubetskoy, created a fantastic map of the major Roman roadways in the style of modern subway maps. 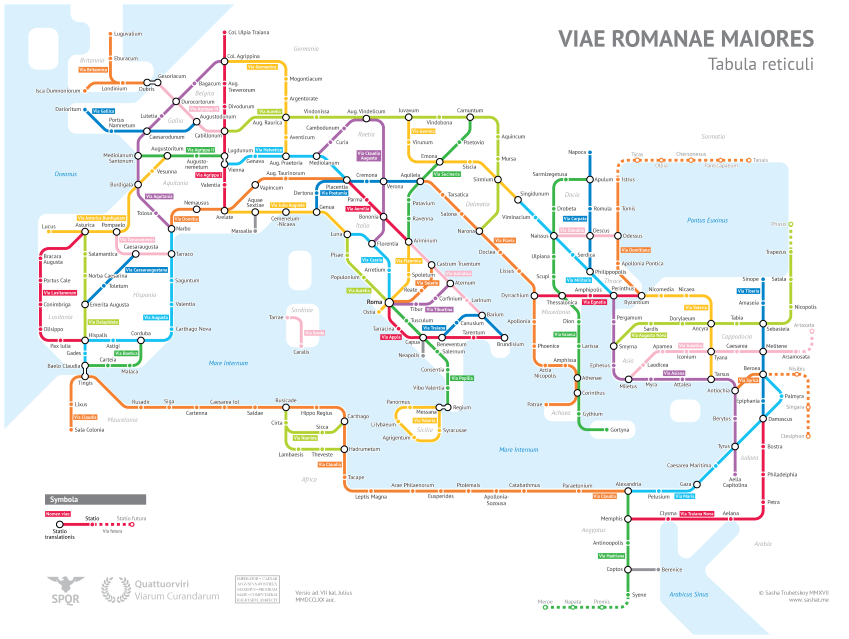 It truly is amazing that two thousand years ago, it was possible to circumnavigate the Mediterranean via paved roads and regular service stations, making it possible for a determined traveler to travel several hundred kilometers in a day.

“I don’t always lie on the floor,” Master Rufus told me today… 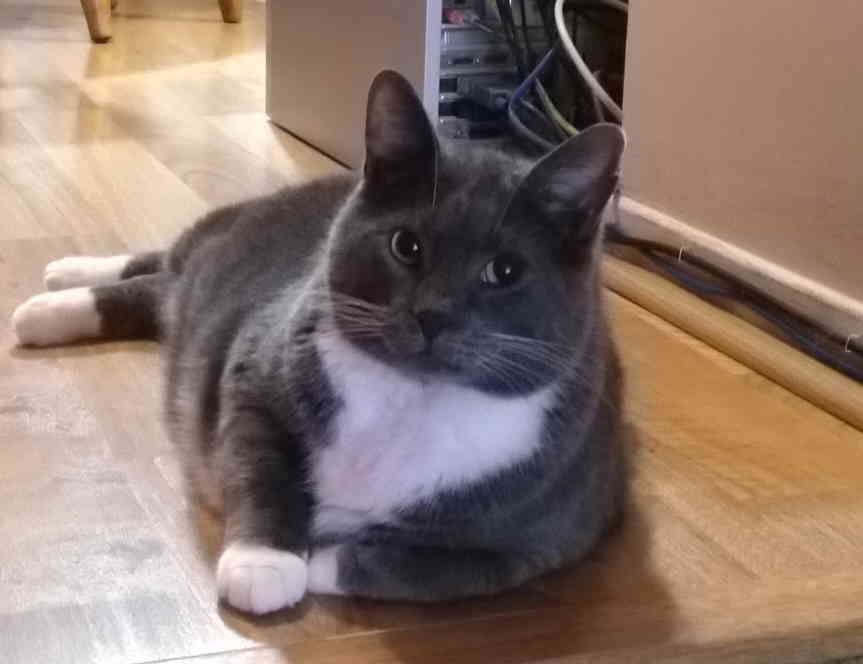 Moments ago, as I was about to close Microsoft Visio after editing a drawing, I was confronted with the following question:

Needless to say, I felt morally obliged to click Save.

In case you are wondering, yes, the file was indeed named earth.vsdx.

There is a new, popular meme on the Interwebs showing how supporters of the Republican Party twist and distort the political positions of Democrats. The meme is not wrong. In fact, on many of the issues it is spot on. Nonetheless, as a friend of mine to whom I forwarded it pointed out, it is rather one-sided.

My friend has a point. It is not a false equivalency. Positions that Republicans hold dear are distorted just as often by their political opponents. Here is my version of the original meme along with my attempt to create its “mirror universe” variant:

My point with this is not that one side is superior to the other. Not even that a moral equivalency exists between the two. It is simply to stress how badly American politics embraced the tactic of demonization and how, from either side’s perspective, their political opponents now represent a greater threat to life, liberty and the American way of life than Kim from North Korea, the ayatollahs of Iran, Daesh, Putin’s Russia, Xi’s China and the COVID-19 pandemic combined.

Which, of course, is nonsense. People can be patriots and hold different political opinions, both in the United States and elsewhere.

A popular Internet meme these days is to present an arithmetic expression like, say, 6/3(4−2) and ask the poor souls who follow you to decide the right answer. Soon there will be two camps, each convinced that they know the truth and that the others are illiterate fools: According to one camp, the answer is 4, whereas the other camp will swear that it has to be 1.

In reality it is neither. Or both. Flip a coin, take your pick. There is no fundamental mathematical truth hidden here. It all boils down to human conventions. The standard convention is that multiplication and division have the same precedence and are evaluated from left to right: So 6/3×(4−2) is pretty unambiguous. But there is another, unwritten convention that when the multiplication sign is omitted, the implied multiplication is assumed to have a higher precedence.

Precisely because of these ambiguities, when you see actual professionals, mathematicians or physicists, write down an expression like this, they opt for clarity: they write, say, (6/3)(4−2) or 6/[3(4−2)] precisely so as to avoid any misunderstanding. Or better yet, they use proper math typesetting software such as LaTeX and write 2D formulas.

August 8 is world cat day. As a proud servant to two feline masters, I celebrate. I know, I know, the idea is far from original, and I feel compelled to apologize for turning tragedies into a form of dark humor but still, this calendar that I made last night accurately sums up how I feel about this glorious year of 2020: And I didn’t even include everything (e.g., BLM protests and accompanying riots). But then, there are nearly five more months to go… plenty of time for more stuff to happen, even without aliens or killer asteroids. Or a massive second wave of COVID-19 infections.

The actual power of the massive explosion is yet to be estimated accurately (probably not quite as large as the largest non-nuclear, accidental explosion that took place in Halifax, Nova Scotia 103 years ago though it comes close), but the images and videos are horrifying. Reportedly, windows were shattered as far as 25 kilometers away from the epicenter.

The audio on one of the many videos showing the moment of the explosion accurately captures the event: “What the actual fuck?” asks a woman’s voice incredulously.

In light of the scope of the disaster, I expect that the final death toll will far exceed the 78 deceased that we know about for now.

It now appears that it was an industrial accident: welding work setting off a fire that in turn spread to a warehouse where thousands of tons of ammonium nitrate was stored.

Naturally, it didn’t prevent America’s “stable genius” from talking about an “attack”. When asked, he even referred to his “generals” who, according to him, told him that it was likely an attack.

I have no doubt that he made it all up on the spot. But his pronouncement had predictable consequences. It was like pouring oil on the fire, as it gave an excuse for every closet antisemite to come out and spread the conspiracy theory that it was an attack by Israel. Twitter accounts spreading this inflammatory nonsense include a Robert de Niro parody account; for a brief moment, I thought it was the real Robert de Niro, which would have been terribly disappointing.

Wildfires in Australia, locusts in Africa, a global pandemic, widespread racial riots in the United States, “murder hornets” spreading in North America… The Internet was already full of joke calendars for this year with disaster memes, as well as speculation that perhaps that infamous Mayan calendar was misinterpreted, as it referred to 2020, not 2012. In light of this catastrophe in Beirut, I am inclined to ask, what next? Alien invasion? The Yellowstone caldera? Global thermonuclear war? Giant asteroid impact? I won’t even try to guess, just note that we still have nearly five months left of this year.

For years now, Microsoft’s support site, answers.microsoft.com, has been annoying the hell out of me.

It’s not that they aren’t trying. Their intentions are, well… how does the saying go about the road to hell?

Take today, for instance, when Windows Update gave me an error message that I have never seen before: “We could not complete the install because an update service was shutting down”. What the bleep? Why causes this? How do I fix it?

A quick Google search led me to the aforementioned Microsoft support site. I was, of course, hoping to see a solution there.

A volunteer moderator offers a marginally useful reply: Check if the Windows Update service is set to automatic, and/or try to manually install the update in question.

An independent advisor asks what version of Windows caused the issue.

Needless to say, I wasn’t planning to run manual updates or reinstall Windows. I was simply hoping to see if perhaps there was an explanation of what might have caused this error and any specific recommendations, before taking the one obvious step that was not mentioned by any of the responders: open the Task Manager, click the Services tab, right-click the Windows Update service (wuauserv) and click Restart. Why is it so hard to, you know, refrain from answering a question unless you actually know the bleeping answer?

Reminds me of why I never really liked unmoderated Usenet newsgroups. At least on answers.microsoft.com, you don’t get answers like “what kind of an idiot still uses Windows” or “you must be a fool, installing updates”.