In case anyone had doubts, allow me to dispel them by demonstrating just what a talented cartoonist I am: 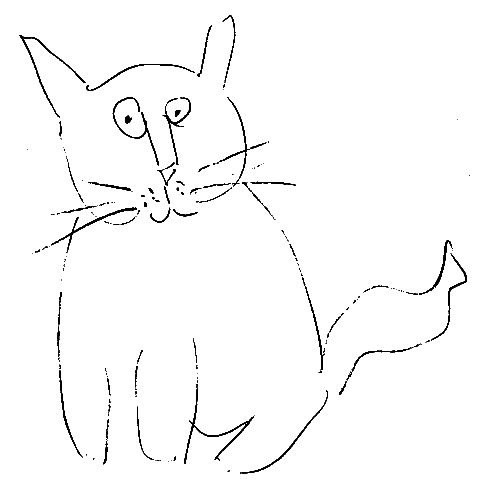 There. Isn’t that a beautiful qat?

What do you do when you are confronted with racism when you least expect it?

No, not the overt kind. That would be easy. Obviously if someone used the N-word to descibe a black person, the K-word to describe a Jew, or similar slurs in my presence, I would tell them in no uncertain terms to get out of my face with that caveman racist attitude.

But what if it is something more subtle, more insidious?

Like, when a close friend explains to you how it is not racism but bad experience that turned them suspicious towards black people. That they used to be color-blind until they were defrauded or otherwise mistreated by black people one too many times.

At first, you think there is hope. You have known this person for a long time. The negative experiences are undoubtedly real. And you know that your friend is, deep inside, a good person. A rational person who can be convinced not to generalize from a few negative experiences and condemn an entire population of human beings on account of the color of their skin. To judge people by their character instead.

You bring up historical examples, pro and con. People from oppressed minorities who demonstrated the strength of their character by the dignified way with which they stood up to oppression, such as Frederick Douglass or Nelson Mandela. Or people who used twisted logic and a false sense of victimhood to justify how they turned from self-professed race-blind innocents into vitriolic racists, such as Adolf Hitler during his years in Vienna.

But then something snaps in you. There comes the moment of realization. It is all pointless. Your moral outrage is ignored or worse, filed away as a hysterical outburst of excessive political correctness, for which you should probably apologize. Your arguments are dismissed because, you know, you were lucky and avoided all those negative experiences and you can afford to remain an idealist unlike your more experienced, more streetwise friend. You try to explain to your friend that adopting a racist attitude means being part of the problem, not part of the solution. To no avail; in fact, you learn that the only reason your friend seemed to favor politicians of a more liberal persuasion is the fear of losing personal benefits. When it comes to race, their views align with the worst.

And it becomes clear at one point that your friend’s dream life is in an affluent, whites-only gated community.

What do you do then? Pretend you haven’t heard anything? Throw away decades of friendship? Or maybe take the easy way out and just turn into a card-carrying Nazi yourself?

I could, of course. I am a tall, middle-aged, white male with (as far as I know) no questionable Mischlingsblut in my veins. I even had some military training. I could click my heels, raise my arm and shout, Sieg Heil!, faster than most semi-literate, drunken Nazis. Jawohl, mein Führer, wir verteidigen die weiße Rasse. And tall as I am, I would look especially impressive in a KKK hood. And then I would have no problems with racism anymore. I could go on and just despise and distrust blacks, Muslims (especially black Muslims, I guess) Asians, Native Americans, Jews, you name it. Anyone who is different from my superior race. Any lesser untermensch. Including, quite possibly, my dear friend.

Trouble is, I still prefer to see a human being, not a monster, staring back at me from the mirror when I brush my teeth in the morning.

No, my white friends. You are no more victims of visible minorities than Hitler was a victim of Jews.

And the time to speak up is now. Even if my friends think that I went berserk with political correctness.

No matter how close a friend or family member you are: If you think your racist views are justified, please just bugger out of my sight.

I like to think of myself as a low-maintenance friend. You don’t have to come over to fix my computer. I don’t ask you to help me move. I don’t demand to be invited to your parties (in fact, I prefer not to be invited at all, being the introvert that I am.) I don’t show up, unannounced, to eat your food, crash on your couch, or borrow your car.

But there is one price for my friendship and that, you must pay. No, not to give lip service to some politically correct doctrine. No, I am not asking you to go all kumbaya with people with whom you feel uncomfortable. I am not asking you to donate all your wealth to people you distrust. The price is that I ask you to think. To imagine what it would be like if it was you who lived in a society that judged you by what others have done, simply because you share a visible characteristic with them. To have no place to go, because prejudice follows you everywhere. To be treated with suspicion at all times.

And then think about your duty as a human being to rise above petty, everyday grievances. To consider, at the very least, the possibility that you, too, bear some responsibility to not make our society worse. And don’t dig your heels in deeper. Don’t wallow in your sense of victimhood. Don’t come up with new justifications for your prejudice.

And for heaven’s sake, do not make your racism worse by calling me a blind idiot. Do not insult my intelligence with the cheapest racist excuse I ever heard, the last refuge of the intellectually incompetent hatemongerer: Do not tell me that I don’t see it the way you do because I have not experienced just how bad it really is where you live. Even if I am inexperienced in these matters, there are plenty of people in your neck of the woods who are not following you down that racist rabbit’s hole.

Can’t do it? Too bad. I will not apologize for this. I will not ask for your forgiveness. This is the price of my friendship. In this day and age, when I am confronted with racism, especially from people closest to my heart, there is one thing I cannot to: I just can’t not speak up.

I have been fancying myself as a TV repairman (I know, I know, a completely useless skill set in 2019) ever since I successfully repaired a 25-year old SANYO television set. I figured I would repeat that success with an even older television: my first television set in Canada, a 1986 Mitsubishi CS-1454C portable television. (By “portable”, they mean it weighs less than about 25 pounds and it can be hauled from one room to another without the use of a forklift.)

The problem seemed simple enough: The TV set refused to turn on. Obviously, I expected a faulty power supply or something similar, maybe due to an aging capacitor somewhere.

Why? Well, the signal to that transistor comes from a microchip:

It comes from pin 28 of a chip labeled μPD-1709CT. What is this chip? Well, it turns out that it is, in fact, a 4-bit microcontroller with about 1.5 kilowords of ROM, factory programmed by the chip manufacturer (NEC) with code supplied by the customer.

I checked, and the microcontroller has everything. It has power, it has a clock signal. It scans the front panel keypad with beautiful, nice square waves on my oscilloscope. The one thing it does not do is outputting a signal on pin 28 when I press the Power button; which, in turn, would have provided a signal for the relay, which in turn would have energized the rest of the unit.

I am therefore forced to conclude that this television is not repairable. Even if I found a replacement chip, chances are that unless it is from the same unit, its program code would be incompatible. (The same family of chips has been used, e.g., in car entertainment systems.) Since I doubt that the manufacturer still provides support for a unit that was sold 32 years ago, the only possible source for a replacement chip would be another, cannibalized television set.

And, of course, the thing is just not worth the effort. An old style, analog television set with a CRT? Years older than half the human beings presently alive on Earth? Still, it was worth a try… I like fiddling with these old devices. Although I much prefer success stories, of course.