The Ottawa Humane Society runs the municipal animal shelter, which is where responsible citizens are supposed to take animals that they find. As a municipal shelter, they sometimes have to accept animals that are in bad shape and, unless their owner claims them, must be euthanized. But, they assure us, they only do so as a last resort; their priority is to find the animals a new home, not to kill them.

This January, we took a lovely cat there. We believed he would be adopted quickly, as he was young, friendly, and beautiful. Instead, he supposedly caught a respiratory infection at the shelter, and he was euthanized.

So this autumn, when a friendly little calico cat showed up, we were in no rush to take her there. Indeed, one of our neighbors eventually decided to adopt the cat, but that same day, the cat disappeared. A few days later, we found that another neighbor took the cat to the Humane Society, who assured our neighbor that the cat will be well taken care of and if not claimed by her owner, she will soon be up for adoption.

Except that she wasn’t. Instead, the cat was killed due to a supposedly severe health problem: gingivitis.

I don’t think I’ll ever be wanting to hear the name “Humane Society” again. 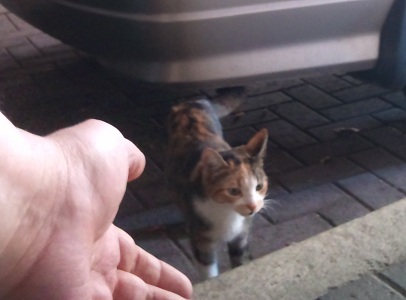 One Response to “Humane(?) Society”