Working from my home office and running my own equipment (including server equipment) here means that I have some rather mundane tasks to perform. As a one-man band, I am my own IT support, and that includes software, as well as hardware.

The less glamorous part of software support is installing updates and patches, resolving driver conflicts, keeping external equipment such as routers and network switches up to date.

The less glamorous part of hardware support? Mostly it involves dust. Ginormous dust bunnies, that is.

Ever heard of the expression, “rat’s nest”? It is sometimes used to describe the tangle of cables and wires that hide behind a computer. Now imagine a computer to which several USB hubs, ten external hard drives and additional equipment are connected, most of which have their own power supply. Yes, it’s ugly. Especially if those little power bricks are plugged into a haphazardly assembled multitude of cheap power strips.

And dust collects everywhere. Thick, ugly dust, made of human dandruff, cat dandruff, hair (human and cat), fluff from clothing, crumbs from many past meals. Normally, you would just vacuum up this stuff, but you don’t want to disturb the rat’s nest. Plugs can come lose. You might lose data. And even if you don’t, simply finding the plug that came lose can be a royal pain in the proverbial.

Long story short, I’ve had enough. The other day, I ordered the longest power strip I could find on Amazon, with 24 outlets, complete with mounting brackets. And yesterday, I managed to affix it to the underside of my main desk. 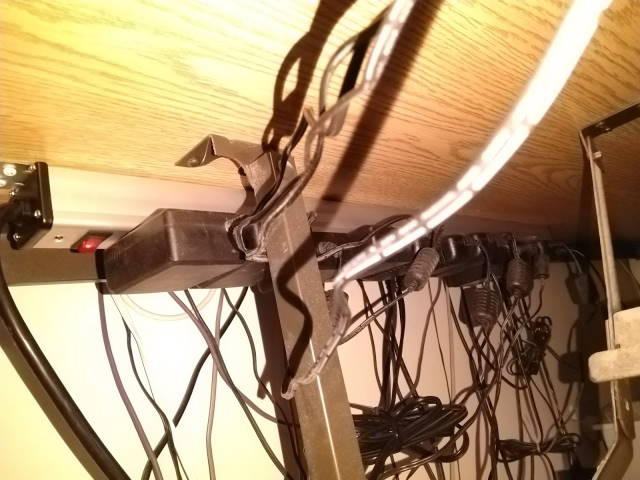 Which means that yesterday and today, working my way through the list one piece of equipment at a time, I managed to move all power plugs to this new power strip. As it hangs from the underside of my desk, it’s most importantly not on the floor. So the floor can be (gasp!) cleaned.

And now I even have room to access my workstation’s side panels, if need be. One of these days, I might even be able to vacuum its back, removing years’ worth of dust from its fan grids. But for now, I contend myself with the knowledge that I freed up four (!) cheap power strips, a three-outlet extension cable, and a three-outlet plug, all of which were fully in use. What a liberating feeling.

Having spent a fair amount of time today on all fours under my desk, however, did prompt me to mutter, “I am too old for this,” several times this afternoon… especially as I still feel a bit under the weather, an unpleasant aftereffect, no doubt, of the COVID-19 vaccine I received yesterday.