This giant billboard was spotted in the city of Miskolc, Hungary: 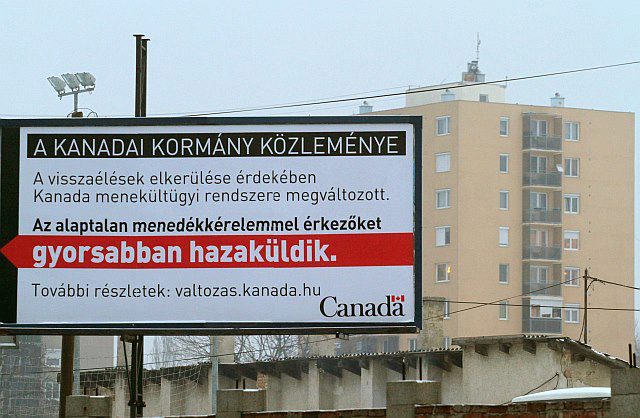 In English, the billboard reads:

ANNOUNCEMENT BY THE GOVERNMENT OF CANADA

To reduce abuse, the refugee system of Canada has changed.

Refugees whose claims are found to be without grounds
are sent home much more quickly.

What’s wrong with this billboard, you ask? Perhaps nothing. It is, after all, important information. And it is located in a Hungarian city that, according to the Government of Canada, is the source of most unfounded refugee claims.

But it also happens to be a city with a high Roma population.

Still, it is not an easy black-and-white issue. It is true that Canada receives a disproportionately high number of false refugee claims from Hungary, an EU democracy, and many of the claimants are Roma. But it is also true that the situation of many Roma in Hungary is more like what one expects to see in sub-Saharan Africa, not in an EU country. And while many Hungarians readily blame the Roma for their own economic plight, it is hard to argue that the palpable fear they feel when a right-wing paramilitary unit marches through a Roma village is of their own doing.

Curiously, the Hungarian ultra-right is not happy about Canada’s toughening stance on Roma refugees. They’d much prefer to see all Roma leave Hungary and settle in Canada.

One Response to “Announcement by the Government of Canada”