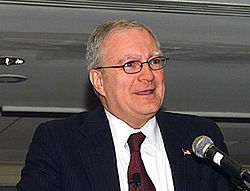 John Marburger had an unenviable role as Director of the United States Office of Science and Technology Policy. Even before he began his tenure, he already faced demotion: President George W. Bush decided not to confer upon him the title “Assistant to the President on Science and Technology”, a title born both by his predecessors and also his successor. Marburger was also widely criticized by his colleagues for his efforts to defend the Bush Administration’s scientific policies. He was not infrequently labeled a “prostitute” or worse.

I met Marburger once in 2006, though to be honest, I don’t recall if I actually conversed with him one-on-one. He gave the keynote address at an international workshop organized by JPL, titled From Quantum to Cosmos: Fundamental Physics Research in Space, which I attended.

If Marburger felt any bitterness towards his colleagues or towards his own situation as a somewhat demoted science advisor, he showed no signs of it during that keynote address. Just as there are no signs of bitterness or resentment in his book, Constructing Reality, which I just finished reading. Nor is there any hint of his own mortality, even though he must have known that his days were numbered by a deadly illness. No, this is a book written by a true scientist: it is about the immortal science that must have been his true passion all along.

It is an ambitious book. In Constructing Reality, Marburger attempts the impossible: explain the Standard Model of particle physics to the interested and motivated lay reader. Thankfully, he does not completely shy away from the math; he realizes that without at least a small amount of mathematics, modern particle physics is just not comprehensible. I admire his (and his publisher’s) courage to face this fact.

Is it a good book? I honestly don’t know. I certainly enjoyed it very much. Marburger demonstrated a thorough, and better yet, intuitive understanding of some of the most difficult aspects of the Standard Model and quantum field theory. But I am the wrong audience: I know the science that he wrote about. (That is not to say that his insight was not helpful in deepening my understanding.) Would this book be useful to the lay reader? Or the aspiring young physicist? I really cannot tell. Learning the principles of quantum field theory is not easy, and in my experience, we each take our own path towards a deeper understanding. Some books help more than others but ultimately, what helps the most is practice: there is no substitute for working out equations on your own. Still, if the positive reviews on Amazon are any indication, Marburger succeeded with writing a book “for [his] friends who are not physicists”.

Marburger died much too soon, at the age of 70, after he lost his battle with cancer. His book was published posthumously (which perhaps explains why the back flap of the book’s dust jacket contains his short bio and room for a photograph above, but no actual photo. Or perhaps I am just imagining things.) But his words survive and inspire others. Well done, Dr. Marburger. And thanks.