It didn’t take very long for Hungary’s far right to turn the Canadian government’s giant billboards into a fascist meme. 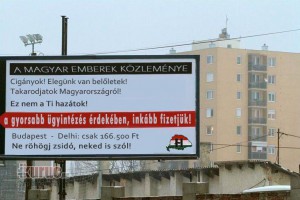 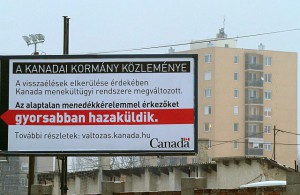 Reacting to comments by Jason Kenney about the plummeting numbers of refugee claimants from Hungary, the infamous far-right Web site kuruc.info responded with a twisted version of the giant billboard placed by our ever so compassionate Conservative government in strategic locations in Hungary… namely, places with a high percentage of Roma population. The original billboards advised would be refugee claimants about the accelerated claims process. The version of kuruc.info is slightly different. It reads:

ANNOUNCEMENT FROM THE HUNGARIAN PEOPLE

Gypsies! We have had enough of you! Get out of here!

This is not your home!
To facilitate faster processing, we would rather pay!

Don’t laugh, Jew, this also applies to you.

In the lower right, the official logo of Canada’s government is replaced by a map of “greater Hungary”.

I hope Messrs. Harper and Kenney are proud of the fodder they provided to these proud protectors of the Hungarian nation.