I have been, and will continue to be, critical of many of the policies of Israel. I think that the policy of occupation, while tactically perhaps important, is a political dead end in the long term. I think it is in Israel’s best interest to help create a viable, strong Palestinian state, as any other solution leaves the Palestinian people in perpetual misery, and may ultimately lead to Israel’s own destruction.

That said… anyone who suggests a moral equivalency between Israel’s policy of occupation and Palestinian terror ought to look at such artistic gems like this Hamas cartoon from yesterday: 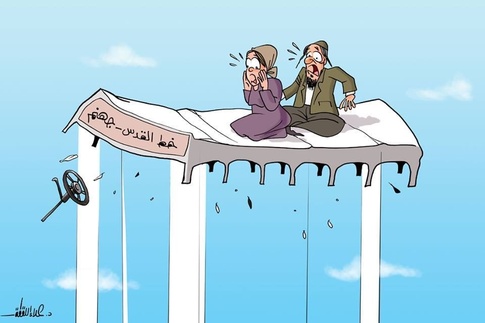 I don’t think even the most rabid far-right press outlet in Israel would find it suitable to publish a cartoon that ridicules the suffering of Palestinian civilians. The fact that Hamas (and many other Arabic press outlets) think it’s okay to publish stuff like this speaks volumes.

But as you wonder who the real injured party is in this never-ending conflict, look at that cartoon again and ask yourself: who is it who actually glorifies violence on civilians, who is it who believes that the indiscriminate killing of civilians is something to be encouraged and celebrated?

And in case this one cartoon is not sufficient, do yourself a favor and search a little bit on Google. Some of the published anti-Israeli cartoons are so depraved, even Hamas disowns them. No, not because they have any sense of remorse, simply the explicit depiction of the rape of an Arab woman by a Jew was too much in conflict with their, oh, Islamic sense of modesty I guess, and they were also concerned that they may have offended their West Bank brethren by making them appear too submissive. Ah, here it is: 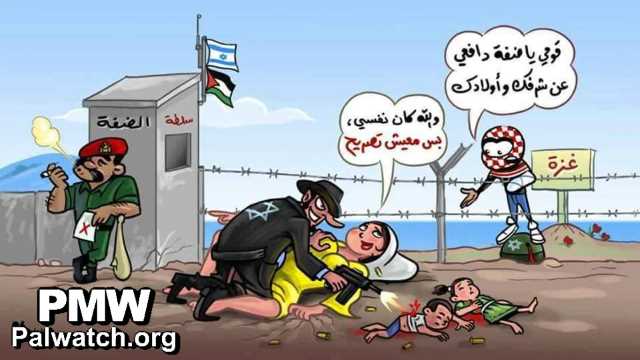 Gaza man: “West Bank, get up and defend your honor and your children!”
West Bank woman: “Yes, I would like to, but I have no permit.”

Lovely artwork, isn’t it? Shows a deep concern for humanity, civil rights and all. Dr. Göbbels would be proud.