It has been a while since I last wrote about our cats.

First and foremost, about our sick kitty, Szürke, whose name means gray in Hungarian. Szürke spends most of his time nowadays in cardboard boxes, where he feels comfortable and safe. His anemia is under control, but his kidneys are not getting any better, and he is also struggling with a severe oral infection. He is getting lots of medications, and we are having a hard time keeping him well hydrated and fed. For now, though, he still enjoys a reasonable quality of life… I hope he will be with us for at least some time to come.

And then there is his brother, Kifli (the word is a type of thin croissant popular in Hungary; Kifli has the color of a bun, but he was much too thin as a kitten to be called “Zsömle”, so this is the name that he got stuck with. He doesn’t seem to mind.) When we got these two kittens, they were so small, both of them fit on the palm of one of my hands. And Kifli was the sickly one: we were so concerned about his health at one point, even his vaccinations were delayed. Nonetheless, Kifli is now a healthy, big cat with no signs of any health problems at the age of 13 years and a few months.

Kifli’s best buddy these days is Pipacs (the name means poppy in Hungarian, and refers to his strikingly red fur of course.) Orange tabbies flock together! Pipacs is a scaredy cat who likes to hide under blankets a lot. 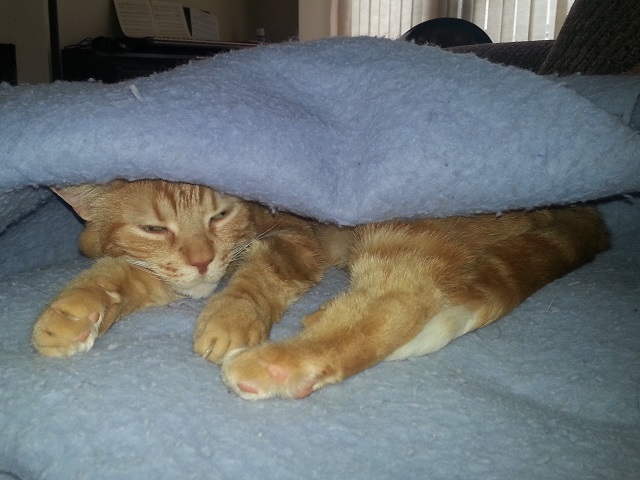 I guess this has to do with the fact that Pipacs was a stray; he showed up at our home during a time of major construction, and eventually we adopted him. He is sweet and lovely, but I hope I’ll never have to give him pills or feed him with a syringe; unlike Szürke, I am sure Pipacs will put up a mighty fight!

We also have another stray, Fluffy. (How else would you name a cat that is, well, just fluffy?) 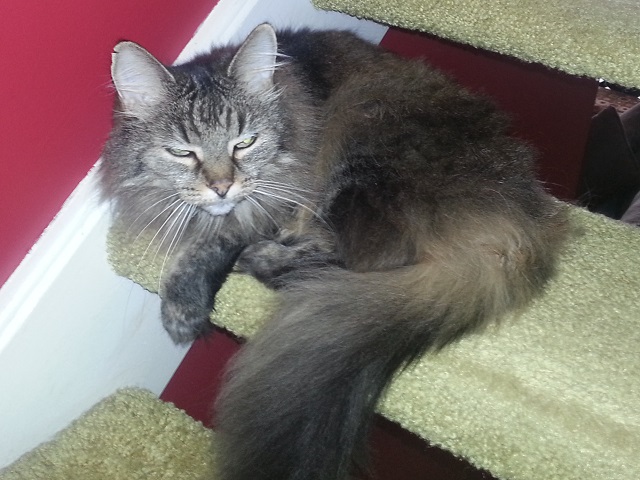 Fluffy is not nearly as easy to scare as Pipacs, but she likes to hide under my desk during thunderstorms. I guess when you have such long, fluffy fur, getting wet is no fun.

Finally, we presently have a house guest: her name is Poppy and she is a return visitor. Unlike our four cats, who are younger, Poppy is a 20th century cat. Her exact age is unknown, as she was adopted from a shelter, but she is believed to have been born in 1999 or perhaps even a little earlier. Poppy is an improbably small cat, with an improbably loud and deep voice. For instance, the other day, I was walking up the stairs when Poppy appeared on top, and I swear she honked at me like she was equipped with a foghorn or something. Poppy is such a fun cat, more than once my wife and I contemplated some grand conspiracy that would allow us to keep her.

So there you have it… a herd of five cats, a Katzenbande (I love that made-up German word). For what it’s worth, all these pictures were made earlier today.