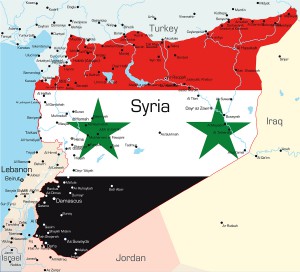 I keep wondering. Is military action in Syria desirable?

A friend of mine who knows the region well is convinced that Bashar al-Assad is indeed behind the chemical attack that took place a few days ago. Further, he believes that al-Assad is a murderer, that those who support him are increasingly isolated, and that most people in the Arab world would welcome a Western intervention, even Israeli involvement if need be, al-Assad is so bitterly hated.

My friend is credible, so his views dispelled some of the doubts I had about the people behind the attack (although I am still not fond of how certain politicians and some of the news media chose to replace information with fiery rhetoric. No, I will not be more pro-war just because you always attach the adjective “heinous” to the noun “attack”; I recognize words with zero information content.)

If my friend is right, military action is certainly justified on humanitarian grounds. And while support for military action in the United States remains low, it should not prevent the US government from doing the right thing.

But simply being just is not enough. The decision to involve the military should not be taken lightly. In particular, the military should be tasked with a goal that is clearly defined and achievable by military force. And while the military action is under way, political support should be complete and unconditional. You can’t win a half-hearted war; indeed, if your enemy knows that you are half-hearted about it, they can easily use this to their advantage and deny you the chance to succeed.

Is there a clearly defined goal in Syria?

I doubt it. Reports say that suspected chemical sites are off limits, as an attack on chemical stockpiles could cause grave damage, dispersing the chemical agents. So what would a limited strike accomplish? Remove al-Assad? Unlikely. A no-fly zone might help the opposition, but a no-fly zone is not being considered. So what, then? Degrade al-Assad’s military? That is not a clearly defined goal. And if al-Assad survives it all, he will come out stronger, being able to claim that he prevailed and thus “won” the war against America.

Is there a firm political commitment?

The US already has two, maybe three unfinished wars to deal with from the past decade. Iraq has become for all practical intents and purposes a vassal state of Iran and scores of people still die there every day in sectarian attacks. In Afghanistan the fight is still on, and there is a good chance that the planned US withdrawal will hand the country to the Taliban on a platter. And then there is Libya; sure, Gaddafi is dead, but what came after is not pretty.

I understand the desire to “do something”. I appreciate the frustration of people of Syrian descent, some of whom I know personally, who’d like the West to be involved. But without a clear military goal and an unambiguous political commitment… I am concerned that any such attack would be pointless and perhaps even counterproductive.

On this note though… I think Stephen Harper should have been a little more unambiguous. This “we support our allies but we have no military plans” is a weasel’s way out, which is very unbecoming of Canada. You are either for it or against it. You cannot have it both ways.