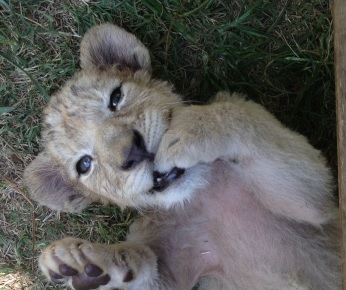 I just watched a news item on CBC Ottawa about a Montreal woman who spent significant amounts of time and money to help raise a lion cub in what she thought was a lion sanctuary in South Africa, only to find out that her cub was being raised to be killed in a canned hunt.

Her lion may yet be saved thanks to her efforts and the donations she’s receiving, but countless other animals will not be as lucky, and not just in far-off third world lands like South Africa.

Apparently, many prominent supporters of the Second Amendment in the United States are also fans of this oh-so-macho practice. Never mind that the Second Amendment once codified a right of the people to deny the state a monopoly on forming an army, as a last resort guarantee of hard-earned freedoms in the American Revolution (against just the kind of decadent morons, I should add, who might be enjoying a canned hunt.) Apparently, the Second Amendment today is about the right to shoot a bird freshly released from a cage, perhaps learning for the first time in its life how to fly, just for the thrill of it, and then leaving the animal to die.

I find it hard to believe that even a I write this, there are people—not just any people, but all too often rich and wealthy people from enlightened first world societies, our “cream of the crop” if you wish—who get a hard-on from shooting a docile animal in an enclosed area. Now I don’t care if you happen to be a former president, vice president, head of the joint chiefs, or some other politician or celebrity. If you are a trophy hunter who shoots canned animals, you are a sick asshole.

Just to be clear, I am not a PETA freak. I may feel disturbed by how some farm animals are treated, but it has not yet made me stop eating meat. I still enjoy a fine filet mignon at a reputable steak house, or even the occasional cheeseburger. But let me repeat: if you are a trophy hunter who shoots canned animals, you are a sick asshole.

I know this is not a polite thing to say. I chose my words carefully and I thought about it long and hard before writing them down. I decided to do so when after I asked myself: would I say the same thing in person?