Bashing Trump is a favorite pastime of mine and that of many of my friends. To be sure, there are plenty of reasons to despise the man: His obvious racism, misogyny, narcissism, nepotism, corruption, his authoritarian tendencies, just to name a few.

But putting the focus on these characteristics leads us to miss a very important point. As a Republican president, Trump delivers. He does precisely what his base (who did elect him, after all) were hoping for. Putting conservative justices on the Supreme Court, who might reverse Roe v. Wade and other landmark “liberal” decisions? Check. Sabotaging Obamacare? Check. Making a stand against immigration? Check. A protectionist economic policy? Check. Standing up even against the Republican establishment in Washington? Check. 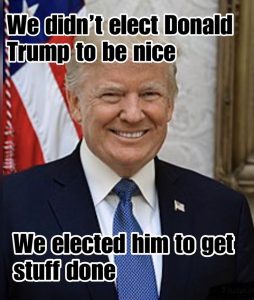 Trump’s base, by the way, also happen to distrust liberal democracy, and may not be adverse to a more authoritarian, strongman-style rule, so long as it is their strongman. As such, they are far less alarmed by the ease with which Trump gets along with other strongmen and the difficulty he has with the leaders of liberal democracies that are America’s traditional allies. This may even be seen as part of his “alpha male” personality, a sign of his strength.

So even if we take the hatemongering, Islamophobia, racism and other unsavory factors out of the equation, Trump is to many a dream come true: He is delivering precisely what they hoped to see from a Republican president.

And it is because of this that they are willing to turn a blind eye to Trump’s personal shortcomings. It may appear hypocritical, but ultimately, it’s just good old political pragmatism.

For this reason, I think it is deeply misguided to focus on the failings of Trump. This visceral reaction to Trump’s personality does not resonate with his base. If anything, it strengthens their perception that their political opposition is a bunch of disloyal losers: unpatriotic liberals who would rather see the man they despise fail, even if it harms America. (That conservatives behaved exactly like this in their opposition to Obama may not cross their minds. In fact, the very fact that they themselves behaved in this manner may be a reason why they so easily believe that their liberal opposition is no different.)

Is left-wing populism the answer? Supporters of Bernie Sanders undoubtedly think so. But I have my doubts. Why would left-wing populism be any better than its right-wing counterpart? In both cases, we end up with leaders who are dilettantes and demagogues. The problem these days (and this issue is not confined within the borders of America; look at Europe, or look right here, at the Canadian province of Ontario) is the collapse of the center. The end of fact-based governance by an increasingly despised technocratic “elite”.

The irony of it is that this liberal world order, for all its failings, kept the world together with no major conflict for the past 70-odd years, a golden age of possibly unprecedented growth and prosperity. (And not just in the first world; just look at global statistics of life expectancy, literacy rates, and other measures that show just how much life improved throughout much of the planet since 1945.) Yet not only is it rejected, it is rejected most vehemently by those who benefited from it the most.

There was another, similar golden era of near unprecedented growth and prosperity: The second half of the 19th century, all the way up to 1914. Yet even as more and more thinkers were convinced that the era of wars between major powers is a thing of the past, the world was heading towards the disaster called the Great War, which plunged the world into chaos, destroyed the prevailing world order, created the circumstances for the rise of the twin evils of communism and fascism, and eventually led to a second world war and the industrial-scale mass murder of the Holocaust.

I don’t know where the world is heading today, but I admit I think about 1914 a lot.