An interesting article appeared on the Web site of BBC News today.

It describes a US president who is anti-immigration, who has a proclivity for conspiracy theories, and who appoints his own daughter to a prominent role in the White House.

But no, it is not Donald J. Trump. It is Millard Fillmore, who became the 13th president of the United States after the death of Zachary Taylor, under whom Fillmore served as Vice-President. 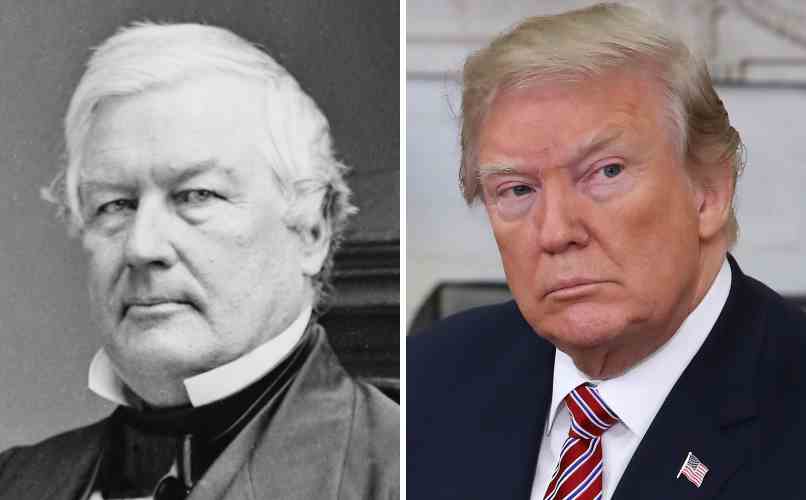 One of the least known among US presidents perhaps, Fillmore nonetheless played a role in the destruction of the Whig Party and the subsequent rise of the Republican Party and their 1860 nominee for President, Abraham Lincoln. It was also under Fillmore’s presidency that the controversial Compromise of 1850 was accomplished. Whether it postponed the Civil War or was a contributing cause remains a subject of debate to this day.

Fillmore’s political career collapsed after his one term. The Whig Party, already in tatters, did not nominate him in 1852. His life was afflicted by tragedies, as he lost his wife and his only daughter in rapid succession shortly after leaving office.

Uncanny similarities notwithstanding, there are also significant differences between Fillmore and Trump. Though described by Queen Victoria as the handsomest man she had ever seen, Fillmore was no rich playboy; he was born in poverty, and he was worried about making a living after leaving the White House, as he was not independently wealthy. And he was certainly a more humble man than Trump: He refused to accept an honorary doctorate from Oxford, stating that he had no “literary or scientific attainment” that would justify the diploma. Besides, his lack of a classical education meant that he spoke no Latin, yet “no man should accept a degree he cannot read”. Somehow, I doubt that such considerations would prevent the 45th president from accepting such an honor.

In 1856, Fillmore again ran for the presidency as the candidate of the newly formed American Party, but only carried the state of Maryland. He died in 1874.