Here is a sobering statistic based on some Gallup data. The only president ever who was more popular among same party followers than Trump was… George W. Bush. 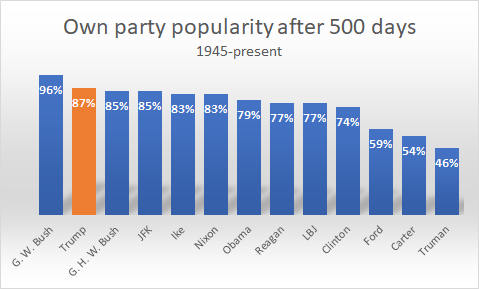 Yes. More popular than JFK, Ike, Obama or Reagan, 500 days into the presidency.

Then again, this chart may reflect a disease that goes deeper than Trump: the continuing ideological polarization of America. Here are the same figures, this time in chronological order: 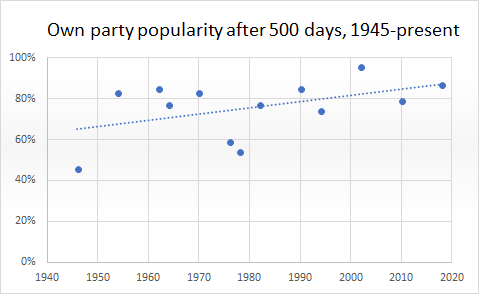 The trend seems unmistakable. After WW2, voters were, it appears, more skeptical. Presidents were approved based on their deeds more than their party affiliation. This appears to have changed in the past 70 years. Now, party affiliation matters more.

Then again… What if Truman, Ford, Carter, G. W. Bush are all outliers? After all, in all their cases the circumstances were unusual, exceptional even. Take them out and what we are left with is a pretty steady approval rating in the vicinity of 80%, give or take.

I don’t know. With a data set of only 13 data points, throwing four away as outliers is a bit excessive.