100 years ago today, as war was raging in Europe, the city of Halifax went up in flames in what remains one of the largest non-nuclear man-made explosions in history.

What began as a series of navigational errors resulted in a collision of two ships in Halifax Harbor, one of which was full of explosives. This ship caught fire and as its crew fled, the burning vessel drifted towards the city. It eventually exploded. 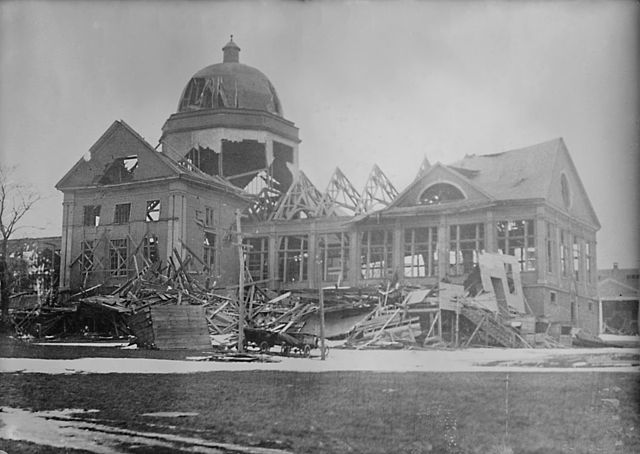 The destroyed Exhibition Building in Halifax, NS, also known as the location where the last body form the explosion was recovered two years later.

By the time it was all over, nearly 2,000 people were dead with many more injured. A large number of people lost their eyesight, as they were watching the harbor from indoors through glass windowpanes. These were shattered by the supersonic shock front of the explosion, the shards turning into shrapnel.

A Mi’kmaq community across the harbor was also destroyed, never to be rebuilt. Many of the residents were killed, while others were housed in segregated shelters, and ultimately dispersed throughout the province.