In the last few days, I upgraded two of my laptops to Windows 10. So far, I have been most impressed by the results. 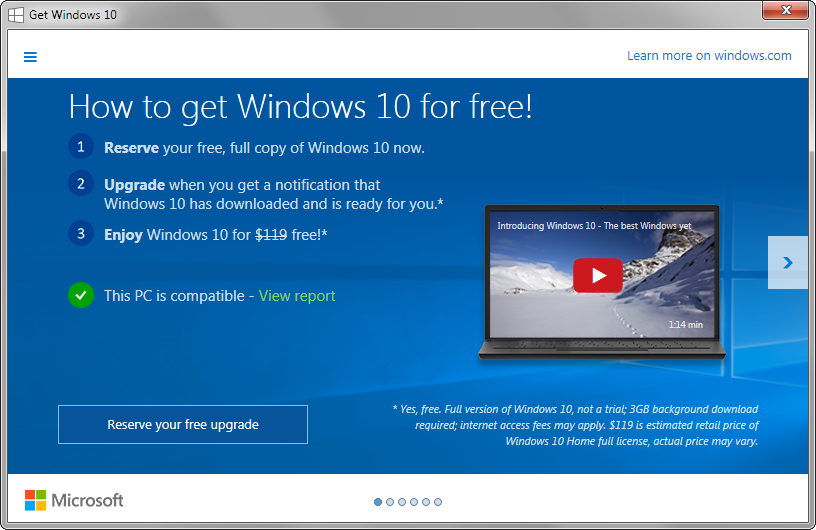 The first laptop is my current “travel” laptop, an ASUS X202E. It is a touchscreen notebook that originally came with Windows 8. I got it real cheap just over two years ago. It turned out to be a much better machine than I expected (despite Windows 8!) so I invested a little extra money and upgraded it with a solid state drive. I also upgraded it to Windows 8.1 when it became available.

The second laptop is closer to five years old I think, an old LG netbook with an Intel Atom processor and only 1 GB RAM, with Windows 7 Starter. I bought it because it was tiny (I like small machines) and real cheap. I used it for a few years as my travel laptop, great for presentations, e-mail, or connecting back to my main desktop via Remote Desktop, but not much else.

The Windows 10 upgrade became available on both machines a few days ago (although I had to fight with the LG netbook a little bit to make it happen; the reasons were unrelated, a bad driver that interfered with the machine in other ways, too.)

To make a long story short: the upgrade ran flawlessly on both machines.

On the ASUS, after the upgrade my touchpad was not responding, but before I could begin investigating the reason, a dialog popped up and informed me that the touchpad driver is being upgraded and indeed, after a reboot, the touchpad was working fine again. All my settings were properly preserved, including an add-on (8GadgetPack) that restored the Windows VISTA/Windows 7 style on-screen gadgets that I have become quite fond of, and which Microsoft removed from later versions of Windows, ostensibly for security reasons.

Encouraged by this, I also started the upgrade process on the netbook. My expectations were not high: I was quite prepared for it to fail on this somewhat obsolete machine. But no… it did not fail. It completed the upgrade sooner than I expected and once again, everything worked just fine. The netbook, of course, remains an underpowered machine, but after it finished configuring itself and its initial indexing tasks ran to completion, the machine became reasonably responsive.

All in all, kudos to Microsoft. This upgrade process through Windows Update far exceeded my expectations. And Windows 10 finally corrects the misguided design decisions of Windows 8. The best way to summarize my Windows 10 impressions is this: on a machine without a touch screen, you don’t miss the touch screen.

EDIT: I almost forgot one thing: the much-criticized privacy settings in Windows 10. Unsurprisingly, “free” comes with strings attached: by default, Microsoft collects a lot of information from your computer. Many of these settings can be turned off (make sure that during the installation process, you don’t accept the defaults) but there are concerns that even with the settings off, Microsoft collects some information that they really shouldn’t. How concerned should we be? After all, if you turn on the “OK Google” feature in your Chrome browser, Google becomes an invisible listener to every conversation in the room. So perhaps it’s true that the era of privacy is over. Still… I turned most of those settings off. Even if it does not protect my privacy, at least it saves a little bit of network bandwidth…