I was once a conservative voter. I voted for the Progressive Conservative party even when virtually no-one else did. I even voted for Kim Campbell back when the PC party was reduced to two seats in Parliament in an historic defeat.

But that was then. Today, we have a party that is conservative in name only: its label has been hijacked by right-wing radicals. The political sins of this government are innumerable, and I wonder if there are enough cats in the world for Mr. Harper (a cat lover) to adopt as a form atonement.

In the past few elections, I voted Liberal. I actually like our MP, Mauril Bélanger, and I was reasonably comfortable with the Liberal Party’s center-right stance.

On the other hand, I was quite disappointed with Mr. Trudeau’s stance on C-51 and his general lack of charisma. The NDP’s Mr. Mulcair, on the other hand, is quite charismatic, and to the extent that I followed it, his performance as Leader of the Opposition was impressive.

So, I hesitate. Liberal or NDP? I am also inclined to vote “strategically”, as I consider both these parties far preferable to Stephen Harper’s Conservatives. But I’d still like to know what I am voting for.

Which is why, when the link showed up in my Facebook feed, I decided to complete a questionnaire by isidewith.com, only to find out that both the Liberal Party and the NDP are a close match for my political views: 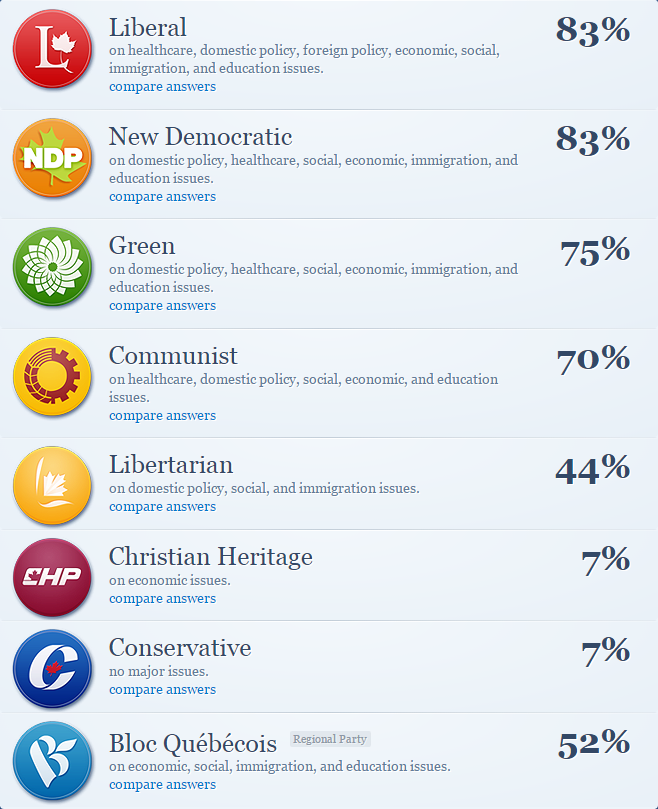 So far so good, but the rest of this list of parties alarms me. A 75% match with the Green Party I can live with, but the Communists, at 70%? What’s wrong with me (or this survey)? If anything, I’d have thought that my views are more Libertarian, but there I only got a 44% match. As for the Conservatives though, the 7% match does not surprise me: as I said above, this party is conservative in name only.

Meanwhile, even as I mull over the pros and cons of voting Liberal vs. NDP, I continue dreaming about a center-right party that favors rational thinking over ideology…