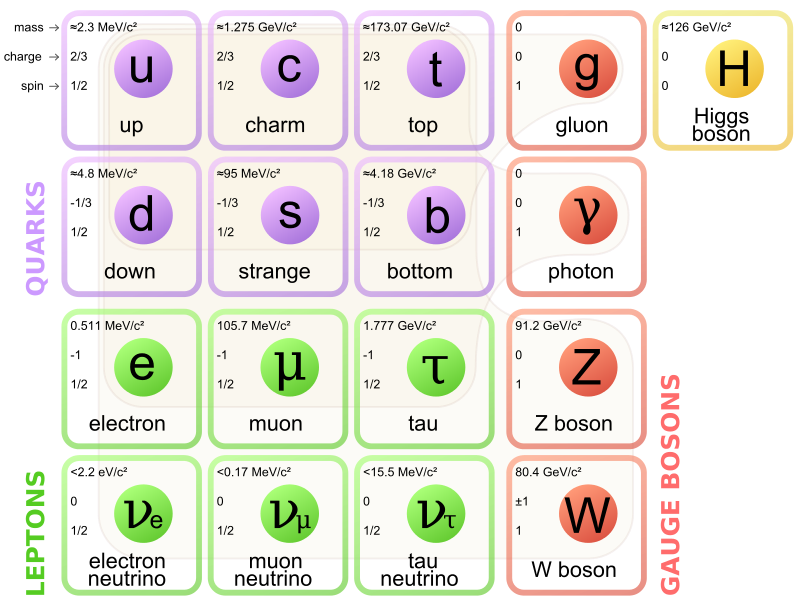 Many popular science books and articles mention that the Standard Model of particle physics, the model that unifies three of the fundamental forces and describes all matter in the form of quarks and leptons, has about 18 free parameters that are not predicted by the theory.

Very few popular accounts actually tell you what these parameters are.

So here they are, in no particular order:

Beyond the 18 parameters, however, there are a few more. First, \(\Theta_3\), which would characterize the CP symmetry violation of the strong interaction. Experimentally, \(\Theta_3\) is determined to be very small, its value consistent with zero. But why is \(\Theta_3\) so small? One possible explanation involves a new hypothetical particle, the axion, which in turn would introduce a new parameter, the mass scale \(f_a\) into the theory.

Finally, the canonical form of the Standard Model includes massless neutrinos. We know that neutrinos must have mass, and also that they oscillate (turn into one another), which means that their mass eigenstates do not coincide with their eigenstates with respect to the weak interaction. Thus, another mixing matrix must be involved, which is called the Pontecorvo-Maki-Nakagawa-Sakata (PMNS) matrix. So we end up with three neutrino masses \(m_1\), \(m_2\) and \(m_3\), and the three angles \(\theta_{12}\), \(\theta_{23}\) and \(\theta_{13}\) (not to be confused with the CKM angles above) plus the CP-violating phase \(\delta_{\rm CP}\) of the PMNS matrix.

So this is potentially as many as 26 parameters in the Standard Model that need to be determined by experiment. This is quite a long way away from the “holy grail” of theoretical physics, a theory that combines all four interactions, all the particle content, and which preferably has no free parameters whatsoever. Nonetheless the theory, and the level of our understanding of Nature’s fundamental building blocks that it represents, is a remarkable intellectual achievement of our era.

One Response to “The parameters of the Standard Model”