Courtesy to a two-part article (part 1 and part 2, in Hungarian) of the Hungarian satirical-liberal magazine Magyar Narancs (Hungarian Orange), I now have a much better idea of what happened at Hungary’s sole nuclear generating station, the Paks Nuclear Power Plant, in 2003. It was the most serious nuclear incident to date in Hungary (the only INES level 3 incident in the country.)

At the root of the incident is a characteristic issue with these types of Soviet era nuclear reactors leading to magnetite contamination of the fuel elements and control rods. To deal with this contamination and prolong the life of fuel elements, cleaning ponds are installed next to the reactor blocks, where under roughly 30 feet of water, in a specially designed cleaning tank, fuel bundles can be cleaned.

As the problem of contamination became increasingly acute, the power plant ordered a new type of cleaning tank. On April 10, 2003, this cleaning tank was used for the first time on fuel bundles that were freshly removed from the reactor. The cleaning of the fuel bundles was completed successfully by 5 PM in the afternoon; however, the crane that was supposed to replace the fuel bundle in the reactor was used for another task and was not going to be available before midnight. The situation was complicated by language issues, as the technicians attending the new cleaning tank were from Germany and could not speak Hungarian. Nonetheless, the German crew assured the plant’s management that the delay would not represent a problem and that cooling of the fuel bundle inside the cleaning tank was adequate.

Shortly before 10 PM, an alarm system detected increased radiation and noble gas levels in the hall housing the cleaning pond. Acting upon the suspicion that a fuel rod assembly was leaking (the German crew suggested that the fuel bundles may have been incorrectly placed in the cleaning tank) the crew proceeded with a plan to open the cleaning tank. When the lid of the cleaning vessel was unlocked, a large steam bubble was released, and radiation levels spiked. Indeed, the crane operator received a significant dose of radiation contamination on his face and arms. The hall was immediately evacuated and its ventilation system was turned on. However, as the system had no adequate filtering systems installed (despite a regulation that six years prior mandated their installation) some radiation was released into the environment.

As it turns out, the culprit was the new type of cleaning tank. A model that, incidentally, was approved using an expedited process, due to the urgency of the situation at the power plant. The fact that the supplier was a proven entity also contributed to a degree of complacency. 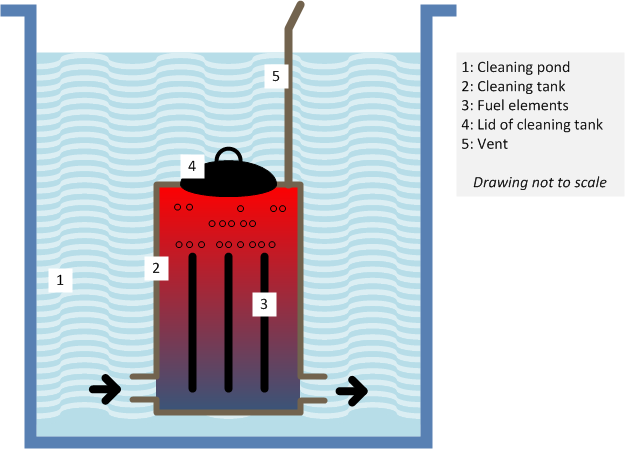 Both the new and the old tank had a built-in pump that circulated water and kept the fuel bundle cool. However, in the old tank, the water inlet was at the bottom, whereas the outlet was near the top. This was not the case in the new tank: both inlet and outlet were located at the bottom, which allowed the formation of steam inside the cleaning vessel near the top. Combined with the lack of instrumentation, and considering that the fuel bundle released as much as 350 kW of heat, this was a disaster in the making.

And that is exactly what happened: due to the delay with the crane, there was enough time for the heat from the fuel bundle to cause most of the water inside the vessel to turn into steam, and the fuel elements heated to 1,000 degrees Centigrade. This caused their insulation to crack, which led to the initial detection of increased radiation levels. When the cleaning tank’s lid was opened, a large bubble of steam was released, while cold water rushed in causing a minor steam explosion and breaking up the fuel elements inside, contaminating the entire pond.

It took another ten years before the last remaining pieces of broken-up fuel elements were removed from the power plant, taken by train through Ukraine to a reprocessing plant in Russia. The total cost of the incident was in the $100 million range.

As nuclear incidents go, Paks was by no means among the scariest: after all, no lives were lost, there was only one person somewhat contaminated, and there was negligible environmental damage. This was no Chernobyl, Fukushima or Three Mile Island. There was some economic fallout, as this reactor block remained inoperative for about a year, but that was it.

Nonetheless, this incident is yet another example how inattention by regulatory agencies, carelessness, or failure to adhere to regulations can lead to catastrophic accidents. Despite its reputation, nuclear power remains one of the safest (and cleanest!) ways to generate electricity but, as engineers are fond of saying, there are no safeguards against human stupidity.