The other day, responding to an e-mail in which I expressed my strong disapproval of the handling of the MH17 disaster by Putin’s government, someone suggested that I hate the Russians.

I most certainly do not. If anything, the contrary is true. I admire Russian culture, Russian literature, Russian music (ever listened to Tchaikovsky’s first piano concerto? Or Shostakovich’s “Leningrad” symphony?) And I will always be amazed by the steadfast, grim determination of the Russian people as they repelled Hitler’s horrific aggression during the Great Patriotic War.

No, my comments were in reference to the actions of Mr. Putin’s government, which I do not confuse with “the Russians”. Despite the fact that apparently, a majority of Russians (for now) support Mr. Putin, there are many who do not. And a perfect, beautiful example of this came to light earlier today, when the opposition Russian newspaper (itself an endangered species) published the following cover page: 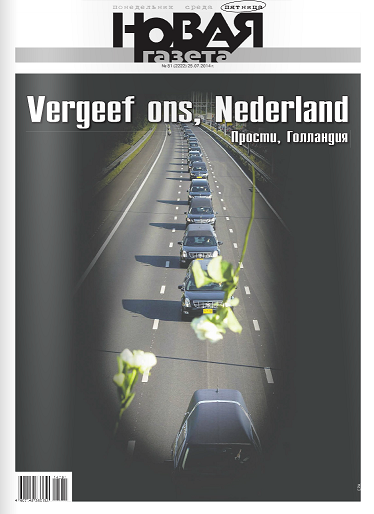 Looking at this cover, I don’t think that it is naive to place faith in the fundamental goodness and decency of “the Russians” even as we remain deeply critical of Putin’s thuggish behavior. This is especially true considering the personal risk that Novaya Gazeta’s journalists must face; four of them were murdered in recent years.