Freedom House is not happy about Hungary.

According to their latest report, Hungary remains a consolidated democracy, but only barely. The threshold index value is 3.00; Hungary slid from 1.96 in 2005 to 2.96 in 2014. (A lower value means a better democracy score.)

Opponents of Orban’s increasingly autocratic regime point at this report as proof that Orban’s government is undemocratic, or worse. They have a point.

But… the trend did not begin in 2010, when Mr. Orban was elected. Hungary’s index was already 2.39 in 2010. The trend is clearly long term, transcending governments. 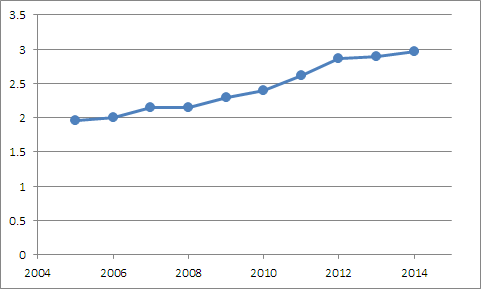 No, it is Hungary as a whole, the country that is turning its back to democracy, listening to populists blaming everything on Brussels; or to radical populists, blaming everything on “international financiers”; or to extremist populists who have no use for such euphemisms and just blame everything openly on the Jews. Or the “liberal-bolsheviks”. Or America (but pointedly NOT blaming Barack Obama; after all, nothing a black man does can be consequential. No, it’s Joe Biden that they seem to be fixated on.)

What a bunch of… Aw, nevermind.