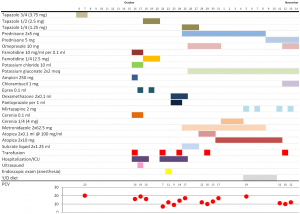 Our cat Szürke remains gravely ill and I don’t know if he will make it.

About two years ago, he was diagnosed with hyperthyroidism, a not altogether uncommon disease among older cats. At the time, we opted to treat his condition with medication (Tapazole); the alternative would have been radiological treatment, which works well but would have required him to spend a long time (couple of weeks, we were told at the time) in quarantine.

Szürke has been doing well although lately, he has been losing weight.

Then, on Sunday October 6, he started vomiting. Occasionally throwing up a furball is not exactly a problem with most cats. Vomiting a clear, foamy liquid eight times in an hour is.

The next day, we took Szürke to our local vet who diagnosed him with renal failure, noted that he was dehydrated, and his T4 level was also very low. We discontinued the Tapazole. Even more alarmingly, he was becoming a little anaemic, with a PCV level of 20 (normal, I believe, is between 30 and 50).

We brought Szürke home. He was doing okay, though his appetite was not great. A week later, on October 16, we went back to the vet for a recheck. The vet became very alarmed when Szürke’s PCV level was measured at 15. She immediately recommended that we take him to Alta Vista Animal Hospital, where he would get a transfusion.

Szürke spent two days at Alta Vista. When we brought him home, the diagnosis was still largely unchanged: the anaemia was believed to have been caused by advanced renal failure. The only thing odd was that his renal values were really not that bad. On the other hand, an ultrasound examination showed no other abnormalities that could have been responsible for his condition.

We brought Szürke home on Friday, October 18, with a prescription for Eprex, a subcutaneous injection that was supposed to stimulate his bone marrow and help him produce red blood cells. Szürke got his first injection on Saturday, but we never got to the second two days later, as by that time, Szürke stopped eating altogether. So instead of injecting him, I took him back to Alta Vista.

This time around, Szürke spent four days at the hospital. He received two more transfusions, as his PCV levels dropped to alarmingly low levels (the lowest, I believe, was 7.) On Tuesday, October 22, we actually visited him late at night, thinking that this was probably good-bye.

By this time, however, the diagnosis was different. For starters, a detailed blood test showed that his anaemia is likely regenerative: his reticulocyte count was higher than normal, in fact. I actually viewed this as both a ray of hope and as a message of sorts: if his little body has not yet given up fighting, how can I give up on him?

So the question then, was this: is his regenerative anaemia anemia due to a haemorrhage or haemolysis?

There were no obvious signs of haemorrhage. There was no blood in his vomit or his stool (though my wife and I noticed, and brought to the vet’s attention, that his stools were significantly darker than normal.) So the doctor’s first bet was that the anaemia is haemolytic, due either to an infection or an autoimmune condition. A biopsy was non-conclusive but it indicated a possible minor gastrointestinal infection. Still, the doctors were leaning towards an autoimmune condition as a more likely explanation.

I brought Szürke home on the 25th of October, with prescriptions for Prednisone, Omeprazole, potassium gluconate, Metronidazole and Sulcrate. He was also back on Tapazole, albeit at a much reduced dose. His PCV level after his last transfusion was 17. Yet three days later, when I took him back for a recheck appointment, his PCV was down to 12. At this time, after discussions with the doctor, we opted to discontinue to the Tapazole altogether, betting on the possibility that the autoimmune response was due to sensitivity to this medication. The Sulcrate was also discontinued (he responded very badly to my attempts to administer this liquid medication.) On the other hand, he began receiving cyclosporine in liquid form.

Nonetheless the next day, his PCV levels were further down, to 10, and he was vomiting, so I took him back to Alta Vista for his fourth transfusion. With his PCV back at 13, I brought him home. Two days later, on October 31, we went for a recheck and, surprise: his PCV was up to 17! Finally, some real hope, we thought. Also at this time, the liquid cyclosporin was discontinued in favor of a capsule, which was much easier to administer.

We were okay for a few days. The next visit was on Friday, November 4. By then, Szürke’s PCV was up to 20! However, his T4 levels were going through the roof, due to his untreated thyroid condition. On the vet’s advice, we began to give him an appetite stimulant (Mirtazapine) in the hope that this will be sufficient to make him eat a special, low-iodine diet (Hill’s Y/D) which would allow us to control his thyroid without medication.

For a few days, all seemed to go well but then his appetite dropped, despite the Mirtazapine. On November 11, I took Szürke to our local vet, who checked his PCV: a disastrous 11. I immediately discontinued the Y/D diet and started giving him whatever he liked… the thinking was that if these were to be his last few days on Earth, I won’t try to starve him with food he wouldn’t eat, and if there is still hope, the thyorid is a long-term concern, whereas the anaemia can kill him in days.

The next day, I discussed all this with the vet at Alta Vista who suggested another possible treatment: Chlorambucil (medication so dangerous, I’m advised to wear rubber gloves when handling the capsules. Scary.) The vet also reluctantly recommend another transfusion. By the time we got to Alta Vista, Szürke’s PCV was down to 9. When I brought him home very late at night, it was back to 12 as a result of the transfusion.

That was two days ago. Szürke is home today, and seemingly doing well. But that has always been the case; even when he was weak as a kitten, his happy disposition never changed, he never ceased being playful, never even stopped grooming himself.

He is eating moderately well. He is interested in the world around him. He is still accepting his medications without too much trouble.

But we still don’t really know what on Earth is wrong with him in the first place. So we are left with taking things one day at a time. I have no idea what tomorrow will bring.