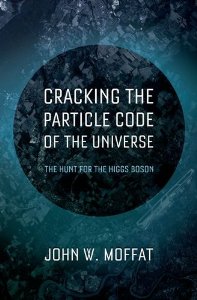 I have been collaborating with John Moffat on his modified gravity theory and other topics since 2007. It has been an immensely rewarding experience.

John is a theoretical physicist who has been active for sixty years. During his amazingly long career, John met just about every one of the iconic figures of 20th century physics. He visited Erwin Schrödinger in a house where Schrödinger lived with his wife and his mistress. He was mentored by Niels Bohr. He studied under Fred Hoyle (the astronomer who coined the term “Big Bang”). He worked under Paul Dirac. He shared office space with Peter Higgs. He took Wolfgang Pauli out for a wet lunch on university funds. He met Feynman, Oppenheimer, and many others. The one iconic physicist Moffat did not meet in person was Albert Einstein; however, Einstein still played a pivotal role in his career, answering letters written to him by a young John Moffat (then earning money as a struggling artist) encouraging him to continue his studies of physics.

Though retired, John remains active as a member of the prestigious Perimeter Institute in Waterloo. I don’t expect him to run out of maverick ideas anytime soon. Rare among physicists his age, John’s knowledge of the science is completely up-to-date, as is his knowledge of the tools of the trade. I’ve seen physicists 20 years his junior struggling with hand-written transparencies (remember those, and the unwieldy projectors?) even as John was putting the finishing touches to his latest PowerPoint presentation on his brand new laptop or making corrections to a LaTeX manuscript.

More recently, John began to write for a broader audience. He already published two excellent books. His first, Reinventing Gravity, describes John’s struggle to create a viable alternative to Einstein’s General Theory of Relativity, a new gravity theory that would explain mysteries such as the rotation of galaxies without resorting to the dark matter hypothesis. John’s second book, Einstein Wrote Back, is a personal memoir, detailing his amazing life as a physicist.

John’s third book, which is about to be published, is perhaps his most ambitious book project yet. Cracking the Particle Code, published by the prestigious Oxford University Press, is about the decades of research in particle physics that resulted in the recent discovery of what is believed to be the elusive Higgs boson, and John’s attempts to explore theoretical alternatives that might make the Higgs boson hypothesis unnecessary, and provide alternative explanations for the particle observed by the Large Hadron Collider.

I had the good fortune of being able to read the manuscript earlier this year.  My first reaction was that John took up an almost impossible task. As many notable physicists, including Einstein, observed, quantum physics is harder, perhaps much harder, than relativity theory. The modern Standard Model of particle physics combines the often arcane rules of quantum field theory with a venerable zoo of particles (12 fermions and their respective antiparticles, four vector bosons, eight gluons and, last but not least, the Higgs boson). Though the theory is immensely successful, it is unsatisfying in many ways, not the least because it fails to account for perhaps the most fundamental interaction of all: gravity. And its predictions, while exact, are very difficult to comprehend even for trained theorists. Reducing data on billions of collisions in a large accelerator to definitive statements about, say, the spin and parity of a newly observed particle is a daunting challenge.

Explaining all this in a form that is accessible to the interested but non-professional reader is the task that John set out to tackle. His text mixes a personal narrative with scientific explanations of these difficult topics. To be sure, the technical part of the text is not an easy read. This is not John’s fault; the topic is very difficult to understand unless you are willing to invest the time and effort to study the mathematics. But John’s personal insights perhaps make the book enjoyable even to those who choose to skip over the more technical paragraphs.

There are two points in particular that I’d like to mention in praise. First, John’s book is amazingly up-to-date; as late as a few weeks ago, John was still making small corrections during the copy editing process to ensure that everything he says is consistent with the latest results from CERN. Second, John’s narrative always makes a clear distinction between standard physics (i.e., the “consensus”) and his own notions. While John is clearly passionate about his ideas, he never forgets the old adage attributed to the late US Senator, Daniel Patrick Moynihan: John knows that he is only entitled to his own opinions, he is not entitled to his own facts, and this is true even if the facts invalidate a theoretical proposal.

I hope John’s latest book sells well. I hope others will enjoy it as much as I did. I certainly recommend it wholeheartedly.