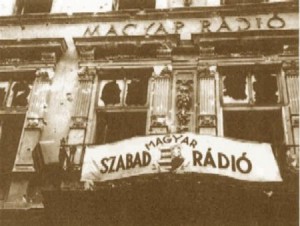 I am reading a letter of resignation, written by a journalist who worked for the newsroom of Hungary’s public radio network until July this year. Unlike many of his colleagues who began their carriers in communist Hungary, Montreal-born Janos F. Antal was a Radio Free Europe correspondent. Here are some experts from this disturbing letter, in my rough translation:

“I was already working on the restoration of national sovereignty when many of you were still standing at stiff attention, listening to the Internationale […] At the time of ‘regime change’ I did not need to switch sides or become a turncoat, I just continued what I began much earlier, at Radio Free Europe…

“I am a spectator, not a participant; a chronicler, not an evangelist. A journalist – not a politician.

“All came to a head, however, when one day someone appeared behind my back and over my shoulder, staring at my monitor, began giving instructions to move this news item up, leave that one out, insert thit one, rewrite that – just like that, in such a tone.

“Moreover, this censorship brings about the growth of manipulative, propagandistic content. Once again the ‘repertoire’ includes production news of the type for which real demand existed only in the Kadar era.”