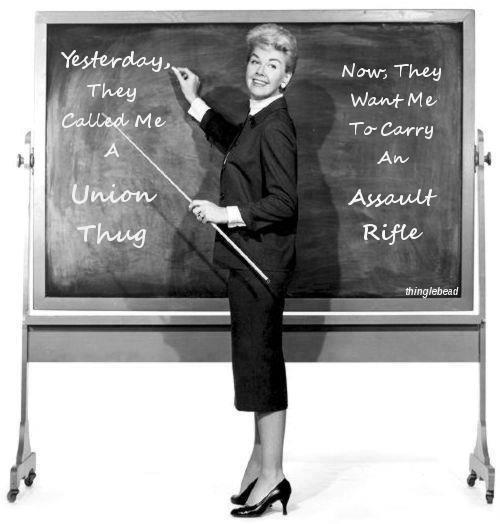 Generally, I am sympathetic towards the American concept of gun rights. The basic idea, as I understand it, is sound: a constitution that explicitly forbids government from claiming a monopoly on organized violence, in contrast with European countries where government has that monopoly. It is part of a well thought out system of checks and balances that characterizes America’s quarter millennia old stable democracy.

What I don’t really understand is how this, the notion of a “well regulated militia” that citizens can freely form and, if needed, rely on to fight government oppression, is related to the concept of granting every imbecile the “God-given” right to have a military grade assault rifle. I honestly don’t think that America’s founding fathers had concealed carry permits and assault rifles in mind when they formulated the Second Amendment.

But where the “gun nuts” really lost credibility in my view is when they began advocating that teachers be allowed, or even required, to carry a gun. Have you guys gone completely bonkers? Do you really think that the solution to tragedies like the Newtown massacre is to turn schools into battlegrounds? Do you actually listen to yourselves when you utter such a blatant idiocy?

I told a pro-gun friend of mine that if gun advocates continue on this course, it will only accomplish one thing in the end: we may yet see the Second Amendment repealed within our lifetime. And if that happens, the “gun nuts” will only have themselves to blame.