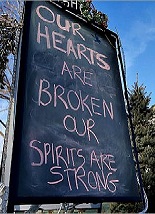 Predictably and understandably, a lot of people are questioning America’s gun laws in the wake of the Newtown, CT massacre.

What I would like to know is this: exactly when did “a well-regulated militia being necessary to the security of a free state” turn into the right for every clown and idiot to own assault weapons or to walk around in crowded places with a concealed handgun? Is this really what the Founding Fathers wanted?

To me, the meaning of the Second Amendment is clear: it is about not granting government a monopoly on violence. It is about the citizenry’s right to arm themselves and if necessary, protect themselves from oppression. But this meaning seems to have been forgotten. Last time I checked, American citizens long ago lost the right (if they ever had it in the first place) to operate private well-regulated militias that own, never mind aircraft carriers or ballistic missiles, how about tanks and fighter aircraft, the kinds of weapons necessary for protection against an oppressive state, as the civil war in Syria amply demonstrates.

So the original meaning of the Second Amendment is long lost; should the US Federal Government turn into an oppressive dictatorship, concealed handguns or semi-automatic assault rifles are not going to do much good against tanks, drones, or smart missiles.

But then, why is it necessary to let every idiot purchase a high-power handgun that serves only one purpose: to kill people, lots of people, at a high rate of efficiency?