A Facebook friend shared this image, a cartoon about conservative vs. liberal views on equality: 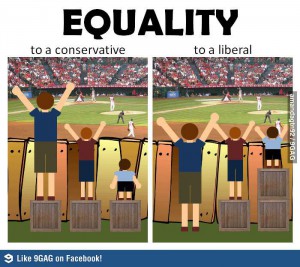 Looking at the image, I realize that deep in my soul, I am in fact a conservative. That’s because I see another variation of the same picture (and it’s not the crudeness of my art to which I am referring): 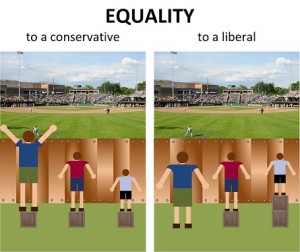 Then again, if I am a conservative, so was Kurt Vonnegut. Why else would he have written a story like Harrison Bergeron, in which a totalitarian state uses a form of mind control to create equality between intellectually gifted and less talented people?

Or perhaps I am neither a conservative nor a liberal (and the same goes for Kurt Vonnegut). Instead, I am trying to use rational thinking to decide what’s best in a given situation, without resorting to ideology or dogma.