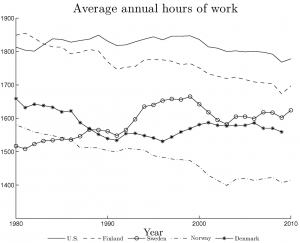 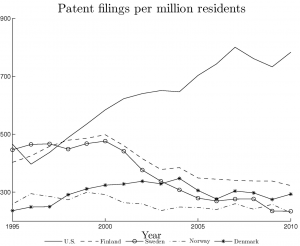 Fareed Zakaria on CNN commented on a recent ranking by The Economist that they called “the lottery of life“. It measured the quality of life in some eighty countries. The United States, number 1 on similar lists in decades past, is now in a tie with Germany for position 16. (Canada is 9th.) Following Switzerland and Australia, the top of the list is dominated by the usual Scandinavian suspects: Norway, Sweden, Denmark are 3rd, 4th and 5th, respectively.

So, can’t we all be more like Scandinavians? This is more than just a rhetorical question. As a matter of fact, this is the title of a recent study by Acemoglu et al. (MIT Department of Economics Working Paper No. 12-22, 2012.) In it, the authors argue that more “cutthroat” versions of capitalism, such as that practiced in the United States, while leading to greater inequality, also lead to more innovation. Meanwhile, countries choosing a more “cuddly” form of capitalism are in fact enjoying a free ride, as they take advantage of the innovations produced by cutthroat capitalists.

The study was reportedly criticized for using patents as a proxy to measure innovation, but I don’t think that this criticism truly undermines their main conclusions. Conclusions that seem to be supported by solid mathematics (at least that’s the impression I got after quickly scanning through the pages of the actual paper). What I find interesting among the study’s conclusions is that the configuration of a technology leader practicing “cutthroat” capitalism and followers who practice “cuddly” capitalism is actually a stable, albeit asymmetric, equilibrium.

I cannot help but wonder though… where does China fit into this picture?