Protesters here in Ottawa claim that the public supports them, but surveys say otherwise. In fact, apparently some two thirds of Canadians support the use of the military to end the illegal occupations. 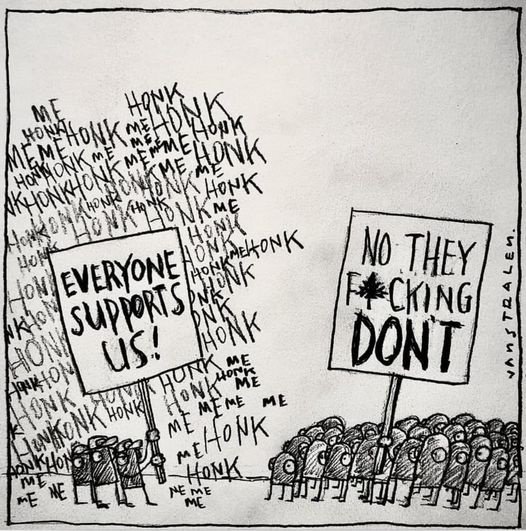 I am fed up to my eyeballs with these insurgents, these seditionists who think mob rule is the way to resolve what could be a rational discussion about the value and validity of certain pandemic measures. (Of course we all know that it’s not about the mandates, it never was. The protesters might think that they are here on account of the mandates but in reality, they are just pawns, the forces behind them are much more sinister.)

But using the military? Talk about turning the propaganda into a self-fulfilling prophecy. The protesters may think of themselves as peaceful, perhaps even law-abiding, but the forces behind them actually covet violence: To them, success is measured by the number of dead cops and dead protesters that will be left on Wellington Street.

Which is why I sincerely hope that the military stays put in their barracks, and once this madness is resolved, the only thing that will need to be cleaned up on Wellington Street will be some litter and debris, and perhaps some doggie poo.