A few hours ago, my phone rang and my friend David told me the sad news: His father, Peter Ada-Winter passed away*. 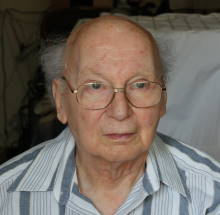 I’ve known Peter since the late 1970s. He was an educator who played a pioneering role in the introduction of computer programming and computer science into the Hungarian school curriculum.

Peter was a true scholar. His home, a cramped apartment in Budapest’s historic Castle District, was full of books. The walls were lined with tall bookshelves. His large desk was also covered with teetering piles of textbooks, newspapers, and computer printouts.

Peter was the son of Ernő Winter, engineer, physicist and inventor, a towering figure in the early development of vacuum tube technology in the 1920s.

Born in 1923, Peter survived the Holocaust that wiped much of his extended family off the face of the Earth.

He was in his mid-40s when, in 1968, he was asked to organize a regular computer programming course for high school students in the same high school where I studied a decade later.

I met Peter when I became friends with his son David in high school. I always looked up to him. I learned quite a few things from him. Not just technical matters, basic human values as well.

Peter’s interest in information technology never diminished. In the mid-1980s, together with his son David they published a book on the 8-bit ZX Spectrum microcomputer. In the 1990s and early 2000s, despite his advancing age, Peter became well acquainted with the Internet; surfing the Web for news became part of his daily life.

Even after he passed 90, Peter remained in good health and mentally active. Only in the last few years did his health begin to gradually decline. Nonetheless, David remained hopeful that they would be able to celebrate Peter’s 100th birthday in 2023 with a ginormous birthday cake. These hopes were squashed by the news David received today.

Though I share David’s sense of grief, I reminded him that instead of grieving, we should remember the long, productive life of a very good man. Someone that I feel privileged to have known.