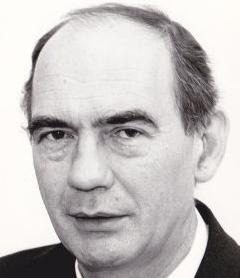 I met Gabor David back in 1982 when I became a member of the team we informally named F451 (inspired by Ray Bradbury of course.) Gabor was a close friend of Ferenc Szatmari. Together, they played an instrumental role in establishing a business relationship between the Hungarian firm Novotrade and its British partner, Andromeda, developing game programs for the Commodore 64.

In the months and years that followed, we spent a lot of time working together. I was proud to enjoy Gabor’s friendship. He was very knowledgeable, and also very committed to our success. We had some stressful times, to be sure, but also a lot of fun, frantic days (and many nights!) spent working together.

I remember Gabor’s deep, loud voice, with a slight speech impediment, a mild case of rhotacism. His face, too, I can recall with almost movie like quality.

He loved coffee more than I thought possible. He once dropped by at my place, not long after I managed to destroy my coffee maker, a stovetop espresso that I accidentally left on the stove for a good half hour. Gabor entered with the words, “Kids, do you have any coffee?” I tried to explain to him that the devil’s brew in that carafe was a bitter, undrinkable (and likely unhealthy) blend of burnt coffee and burnt rubber, but to no avail: he gulped it down like it was nectar.

After I left Hungary in 1986, we remained in sporadic contact. In fact, Gabor helped me with a small loan during my initial few weeks on Austria; for this, I was very grateful.

When I first visited Hungary as a newly minted Canadian citizen, after the collapse of communism there, Gabor was one of the few close friends that I sought out. I was hugely impressed. Gabor was now heading a company called Banknet, an international joint venture bringing business grade satellite-based Internet service to the country.

When our friend Ferenc was diagnosed with lung cancer, Gabor was distraught. He tried to help Feri with financing an unconventional treatment not covered by insurance. I pitched in, too. It was not enough to save Feri’s life: he passed away shortly thereafter, a loss I still feel more than two decades later.

My last conversation with Gabor was distressing. I don’t really remember the details, but I did learn that he suffered a stroke, and that he was worried that he would be placed under some form of guardianship. Soon thereafter, I lost touch; his phone number, as I recall, was disconnected and Gabor vanished.

Every so often, I looked for him on the Internet, on social media, but to no avail. His name is not uncommon, and moreover, as his last name also doubles as a first name for many, searches bring up far too many false positives. But last night, it occurred to me to search for his name and his original profession: “Dávid Gábor” “matematikus” (mathematician).

Jackpot, if it can be called that. One of the first hits that came up was a page from Hungary’s John von Neumann Computer Society, their information technology history forum, to be specific: a short biography of Gabor, together with his picture.

Well… at least I now know. It has been a privilege knowing you, Gabor, and being able to count you among my friends. I learned a lot from you, and I cherish all those times that we spent working together.

4 Responses to “Another friend gone”