I’m still trying to digest this… the meaning of recently released e-mails that suggest, to put it mildly, questionable behavior on behalf of some of the world’s leading climate researchers.

One e-mail that’s most hotly debated is about this: 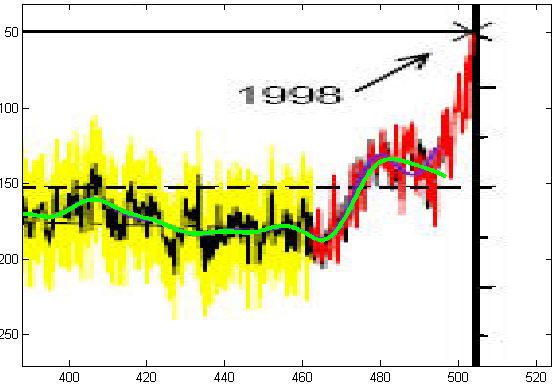 Note that this doesn’t mean that there is a downward trend. The planet may very well be warming, due to what people are doing to it. Unfortunately, the information content of manipulated graphs is zero, or less than zero even… they can generate skepticism towards genuine future results and delay a necessary public response.

There are many other questionable e-mails in the lot, including e-mails that suggest the hiding of data from freedom-of-information requests, e-mails that suggest efforts to block the publication of research by climate change skeptics, and at least one eyebrow-raising comment cheering at the death of a climate change skeptic, leading to calls for a researcher to resign.

I’m still digesting this, but it reinforces my conviction that phrases like “standard model” or “scientific consensus”, far from reassuring, should be a clear indication that the science might be shaky, and that an attempt is being made to substitute authority in place of convincing data and firm logic.

One Response to “Climate change?”