About a week ago, our seventeen-and-a-half year old cat Kifli lost his appetite and started to have a bit of a diarrhea. Nothing too concerning, but we decided to take him to the vet come Monday. 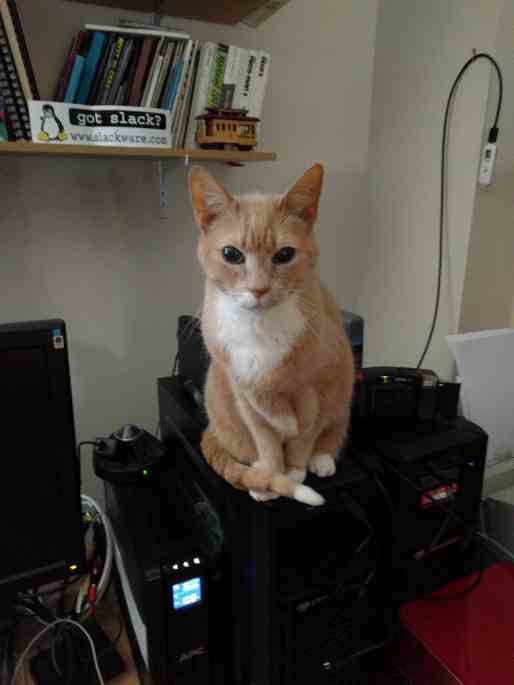 Kifli in happier times sitting on top of a server he should not have been sitting on. May 2018.

By Monday morning, things were obviously more serious as Kifli stopped eating. He was still drinking though, so we were not too concerned. But an urgent visit to the vet was no longer merely optional. Still, our main concern at this time was to request the vet to clip Kifli’s claws, because he always managed to get them stuck in pieces of furniture (not to mention our own rather tender skin.)

But then, once the bloodwork came back on Tuesday, the vet told us that the symptoms were those of pancreatitis, quite possibly a result of lymphoma or some other form of cancer. The prognosis was poor.

An ultrasound exam was recommended. The ultrasound specialist was booked for Wednesday evening.

By Wednesday morning, Kifli was doing a lot worse, so I called the vet and took Kifli there in the morning, to make sure he is under proper medical care. He received some fluids. When I went to pick him up in the evening, his belly was shaved (for the ultrasound) and he was still very wobbly from the anesthesia. The vet, in fact, was concerned and recommended a stay at an overnight hospital nearby. However, when it became clear that the kitty may not live to see the morning, we opted to keep him home instead, closely monitoring him for signs of distress.

When we got home, Kifli was agitated. He released a few drops of urine. We presented him with a litterbox near his basket, but that was not good enough for him; though wobbly and groggy, he ambled and stumbled downstairs, to use the regular litterbox (more or less successfully.)

The night was uneventful. Kifli even seemed to recover a little. But in the morning, his condition was getting worse.

But then, a ray of hope! A cytology result arrived late in the morning, and it showed that the likely cause was a massive bacterial infection, not cancer. So suddenly, instead of planning for euthanasia, we were discussing a treatment plan with the vet. An aggressive plan involving multiple medications and a feeding tube (and no guarantee of success) but… well, a very thin, anemic ray of hope, but a ray of hope nonetheless. So I took Kifli to the vet again, to get him prepared for the mild anesthesia required to insert the feeding tube.

The call from the vet came much sooner than I expected. Not with good news. Kifli was collapsing. He already had a seizure, and he was now breathing pure oxygen, kept alive by a heated blanket as his heart rate and body temperature were dropping both. We knew what this meant. A final trip to the vet, from which we would come home with an empty cat carrier.

As we made our way through an unusually heavy traffic jam (a combination of afternoon traffic and a road closure), the vet called us again. “What would you like me to do in case Kifli goes into cardiac arrest?” His condition was that bad. I asked the vet to use her best medical judgment.

Kifli was barely alive when we got there, about ten minutes later. We had one final discussion with the vet and then agreed to the inevitable. My hand was on Kifli’s chest when he received the first injection. His little heart stopped instantly, without waiting for the second injection. It was truly his time.

What I feel right now is unbearable heartbreak, but I know that soon enough, I’ll be able to smile again as I recall his antics. He was… quite a cat, that’s all I can say.