When I was a teenager, the classic novel, The Count of Monte Cristo by Alexandre Dumas, was one of my favorites.

And one of my favorite chapters in that book was a chapter with an uncanny (not to mention unusually long) title: “How a Gardener May Get Rid of the Dormice that Eat His Peaches”. In it, Dumas describes a classic hack: exploiting the human in the system. By bribing an operator of France’s early optical telegraph network, the book’s protagonist is able to plant a false message, which ultimately contributes to the downfall of one of his mortal enemies. In short: a targeted cyberattack on a telecommunications network. 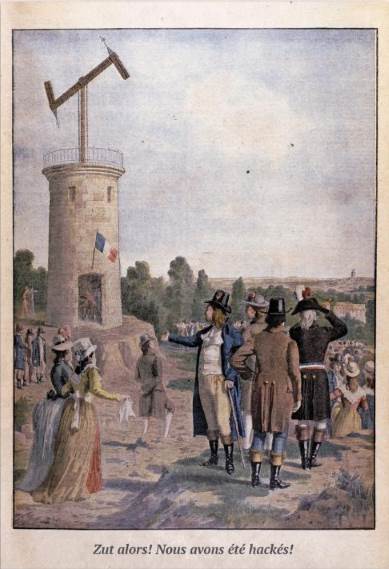 What I did not know, however, is that this chapter may have been inspired by real life events. About ten years before Dumas published his novel, the brothers François and Louis* Blanc managed to hack the telegraph network in a manner even more sophisticated than the hack described in Dumas’s book. Yes, the real-life hack relied on bribing operators, too, but it also involved a case of steganography: inserting a coded message that would piggyback on the original telegraph transmission. Not only did the scheme succeed, like any good hack it remained in place and undetected for two years. And when it was finally detected, the Blanc brothers were charged but never convicted; there were, after all, no laws on the books back in the 1830s against misuse of data networks.

*Well, that’s what Wikipedia tells me. It appears that the twins are misidentified as Francois and Joseph in several English-language publications. Francois was later known as The Magician of Monte Carlo, a casino that he owned and where he first introduced the single-0 style roulette wheel.