And now I am rooting for Andrea Horwath.

No, I won’t be voting NDP in the upcoming Ontario election. I live in a strongly Liberal riding (it is said that if the Liberals win one seat in this election, it will be this one), and I am actually quite pleased with our MPP, Nathalie Des Rosiers. The NDP in this riding is a distant third in the polls.

But throughout the province, support for the Liberal Party collapsed, and populist Doug Ford, heading the Progressive Conservatives, seems poised to become the province’s next Premier. 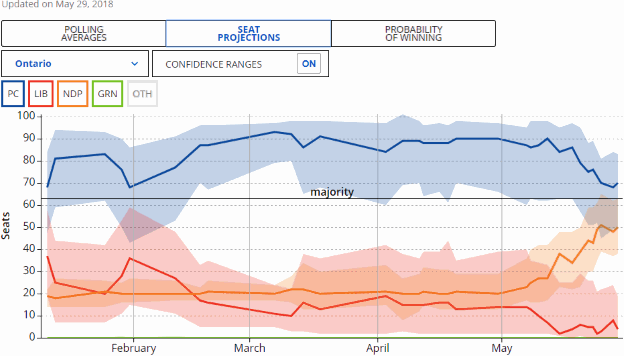 Unless Andrea Horwath and the NDP can stop him.

To be sure, I don’t really like the NDP. I like some of their ideas, but on many things, they are too far to the left for me to feel comfortable. I fear that their policies will have a negative impact on the province: higher taxes, a more business hostile climate. I lived in Ontario a generation ago when Bob Rae led the last NDP government, and while it was no disaster, it was not too good either.

But we survived. And policy mistakes are one thing… ignorant alpha-male populism is in another league altogether.

So do I look at Horwath as the lesser of two evils? Not really. I don’t consider Horwath evil. At worst, the NDP are misguided. But they seem like reasonable folks, willing to listen to the facts. Which means that, more than likely, once they are in power, they will actually disappoint some of their most ardent followers as they moderate their views and adjust to the realities of everyday governing.

Ford, on the other hand, is likely to do far more damage. Reckless tax cuts combined with a march toward balanced budgets will lead to catastrophic cuts in public services, with damage likely lasting generations. OHIP, public transport, potholes, the energy infrastructure… all of that and much more are on the line. Then there are those campaign promises (such as new hospital beds) that have not been budgeted for, and in my opinion, will never be, as these are empty promises with no real intent to follow through, once elected.

In short, in Horwath I see a responsible leader committed to some leftist ideas that I am not unduly fond of. In Ford, I see a naked hunger for power, reckless populism, ignorance, irresponsibility.

So for the first time in my life, I am actually rooting for the NDP.