In the late 1960s, early 1970s, Hollywood responded to social upheavals and perceived lawlessness by creating a series of renegade, vigilante cops, played by the likes of Charles Bronson or Clint Eastwood.

Today, perceived changes, threats to “us”, fear from “them”, seem to be bringing about another result: the rise of political strongmen around the world. This is the topic of a new article in TIME, also featured on the cover of their upcoming issue. 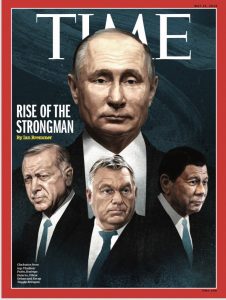 Pictured are Putin, Duterte of the Philippines, Orban of Hungary and Erdogan of Turkey. Not shown but extensively covered in the article are Xi Jinping, Egypt’s al-Sisi, and, of course, Donald Trump. Other strongmen are also mentioned.

What is this world coming to? Why are people who benefited the most from liberal democracy so keen to reject its values?

And in particular, why do we let the free Internet, one of the greatest inventions of liberal democracy, become a tool of state propaganda, a conduit for fake news? Why do we let the powers-that-be censor it or, worse yet, use it as a tool of oppression, as a means to build a totalitarian surveillance state?

Nor do I believe that Canada is immune. We are about to elect our very own strongman here in the province of Ontario. Doug Ford, brother to the scandal-plagued former mayor of Toronto, the late Rob Ford, is destined to become the next premier of this province. And who knows what will happen next… I am sure Doug Ford’s ambitions do not end with Queen’s Park.

In the end, it becomes a test of the strength of democratic institutions. In the US, Trump cannot ignore the courts, and may soon face a hostile legislature. In Canada, the Prime Minister may control Parliament, but the court system is strong and the press, too, remains independent. Even so, I’d rather not stress-test our democracy.