So our American friends south of the border have a new tax legislation. I’ve seen many discussions of how it affects people in various income brackets, but all too often, these are more confusing than helpful.

So instead, here is a handy chart that shows how the federal tax rate decreases as a percentage of taxable income for individuals, joint filers and heads of households (based on tables provided by CNN): 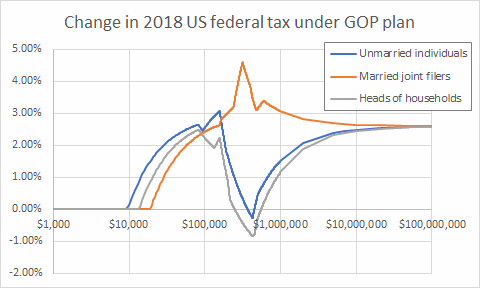 While most folks will enjoy a tax break, it is interesting to see that some individuals and heads of households will actually see a tax increase: 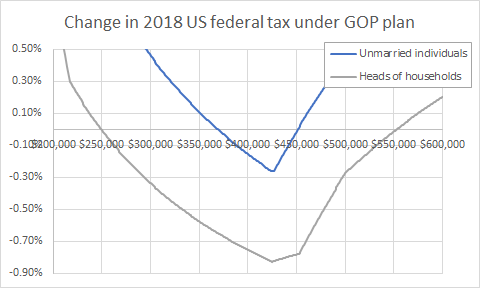 Married couples benefit the most (mainly as a result of some arcane tax brackets that were in effect before the new legislation), which is probably a Good Thing; I am not so sure about the 2.6% tax break offered to the wealthiest, however.

Anyhow, I pay my taxes in Ontario, Canada, so it really doesn’t bother me one way or another, I just wanted to understand a little better what actually is going on.