Not sure how it happened, but it appears that I was a successful political animal today. Kevin McCarthy, House leader in the U.S. Congress, held a question-and-answer session on Quora today, and my question (about Obama’s SCOTUS nomination) turned out to be the top question, which he answered first. Not sure if that is a good thing… after all, I remember all too well the saying, “it’s better to be unknown to the gods than to be loved by them.” Predictably, the answer was a party line answer with very little information content, but still.

Tempting fate a little further, I also created an updated version of an infographic that compares the truthfulness of presidential candidates. Despite her reputation as untrustworthy, and much to my surprise I admit, Hillary Clinton is still pretty much on top (same number of true/mostly true answers as Sanders and Kasich, but fewer untruths). 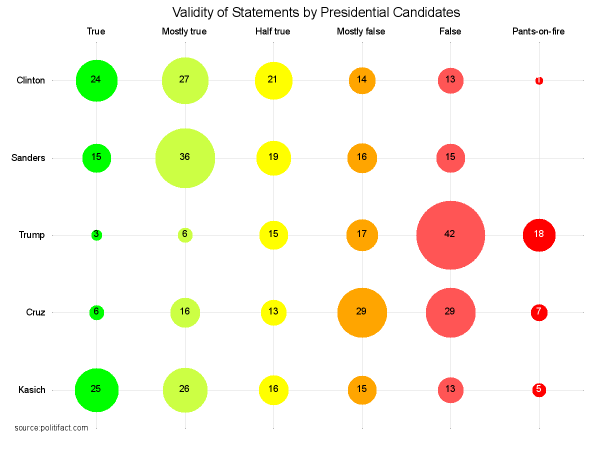 Not that this will stop Trump’s supporters from voting for him. They’ll just declare Politifact biased and full of lies or whatever.