Yesterday, I went to see my barber. When I found the shop open, I was delighted that he kept his promise: he planned to retire at the end of last year, but on my last visit, he told me that he’d be keeping the shop open for a while longer. (Yes, it’s been that long since my last haircut. I don’t like haircuts, but when even my wife notices that I am beginning to look like Albert Einstein, I remind myself that you first have to match Einstein’s output as a physicist before you’re allowed to look like him.)

When I entered the shop, I noticed that it was under renovation. But the sign said that it was open! In fact, it was a brand new electronic sign that advertised the business hours. I didn’t see a soul in sight so I hollered, “hello?” and a young, brown-skinned man soon emerged. He assured me that the shop was indeed open for business, so I made the requisite leap in logic and realized that Michel, the old barber, must have retired after all. I asked the young man if he was going to be my new barber.

Soon, I learned a little bit about Paulos the barber. He came to Canada from Ethiopia about five years ago with his brother. Since then, they managed to sponsor several family members. Paulos is a lean, tall 41-year old man, though he looks much younger. He told me that he found the shop advertised on Kijiji and decided to go for it. He told me of his plans to hire 2-3 additional barbers, and create a much more welcoming shop with Wi-Fi and a coffee machine. I took a closer look at his hours: He is keeping the shop open, for now all by himself, from 9 AM until 8 PM every weekday, and until 6 PM on Saturdays. 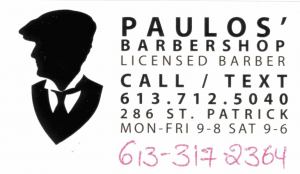 Meanwhile, Paulos finished my haircut. When I asked him how much I owe, he told me that it’s whatever I used to pay Michel. So I paid the same amount, with tip, that I used to pay.

As I left the barber shop, I was shaking my head. Damn immigrants, I thought. They have the audacity to come to this country in search of a better life. And the cheek! Never mind making a living, working extra long hours, they actually plan to create jobs! How dare they.

And the cultural rift. It is hard to find a pair of countries more culturally different than Ethiopia and Canada. Yet he has the chutzpah to do this… finding his place in Canadian society, taking over a business from a retiring French Canadian gentleman and daring to be successful.

What a horrible thing that these immigrants are doing. What hubris… instead of being on welfare and being a burden on society, they dare to make this country better, enrich it with their hard work, contribute to its colorful multiculturalism. It is absolutely intolerable. Just what is this place coming to?