I am reading the latest “alternate history” book by Harry Turtledove: Bombs Away, which describes a world in which President Truman accepts the advice of general MacArthur in 1951 and responds to the Chinese invasion of Korea by deploying nuclear weapons. With predictably disastrous consequences for the whole world.

On account of this book, I looked up historical figures of nuclear stockpiles on Wikipedia, and happened upon a chart that I decided to call the chart of hope. 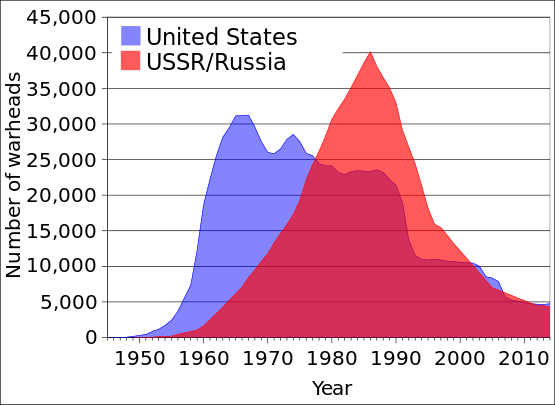 It depicts the number of warheads owned by the two major nuclear powers. (Other countries are not listed; their combined stockpiles never reached 1,000 warheads, so their contributions are too small to appear on a plot like this.)

Although the more than 10,000 warheads that currently exist are still more than enough to destroy much of human civilization (and arguably, the reduction is due partly to more reliable, more accurate delivery systems), just a few decades ago, the number was in excess of 60,000. A ray of hope, perhaps, that sanity might just prevail. One thing is certain: Back in my high school years in the 1970s, very few people believed that we would live to see 2015 without experiencing the horrors of a thermonuclear war.