In the past couple of days, I heard several commentators on CNN lament on the fact that China’s debt-to-GDP ratio is much higher (“three times” higher) than that of the US, and that this may be behind the current volatility of the Chinese stock market.

This, of course, is blatant nonsense. China’s government debt-to-GDP ratio is much lower than that of the US. It is in the low twenties, compared with over 100% in the United States. Here is a crude plot (crude because I graphically edited together two plots, but I had to change the vertical scale of one) that shows the two in comparison. 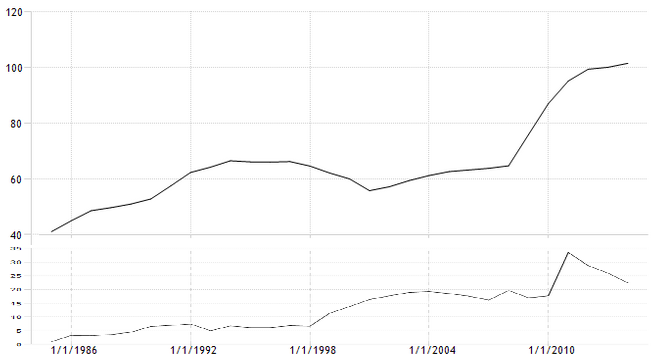 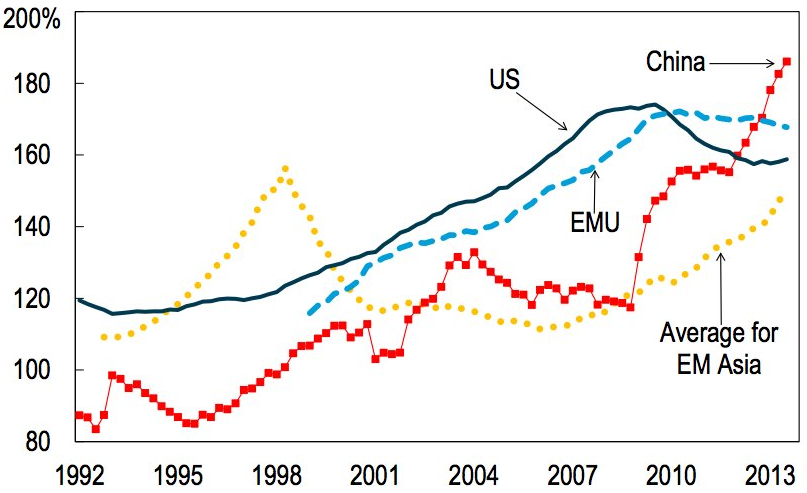 What this chart shows is alarming. No, still not three times the US private debt-to-GDP ratio (that factor of 3 only happens if you compare China’s total debt to US government debt, which is of course comparing apples to oranges), but it is significantly higher than that of the US. What’s worse is that China is still an emerging economy: in addition to the prosperous middle class of places like Shanghai, there are still close to (or more than?) a billion people in that country who live in third world poverty. (China’s per-capita GDP is $6,800; in the US, the figure is $53,000, nearly eight times higher.)

The wisdom I’ve been reading online is that an emerging economy just cannot afford to have the same level of private indebtedness as an advanced economy.

To be honest, I don’t know if it is true. For all I know, much of China’s debt is held by those who can actually afford it, the prosperous middle class with their SUVs and air conditioned homes in Shanghai or Guangzhou. Indeed, if we split China into two countries, one prosperous and one poor, the prosperous one may well qualify as an advanced economy, and it may be holding most of the debt.

Or not. But whatever the debt situation is in China or its impact on the stock market, it is still no excuse for CNN to keep babbling nonsense.